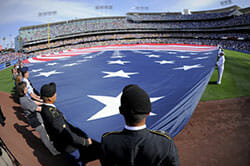 By Steven Salaita. Read his op-ed at Salon.com

“No televised sporting event escapes celebration of the troops. Networks treat viewers to stars and stripes covering entire football fields, complementing the small-but-always-visible flags the studio hosts sport on their lapels. The national anthem is often accompanied by fighter jets and cannon blasts. Displays of hypermasculine prowess frame the reciprocal virtues of courage and devotion embedded in American war mythology.”