Army of None – The Book 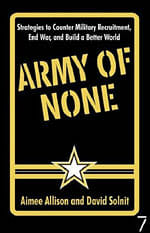 An Army of None: Strategies to Counter Military Recruitment, End War, and Build a Better World

A new book by Courage to Resist organizer David Solnit and Gulf War objector and community organizer Aimee Allison from Seven Stories Press (July 2007), paperback, 120 pages. Available now from Courage to Resist for a $20 donation — that is $5 more than the cover price, but without any additional charges like shipping and handling.

Every day in the United States, military recruiters enter the halls of high schools equipped with a goodie bag of promises and free copies of the US Army’s official new video game, America’s Army. Assurances of non-combat positions and college money made largely to teens of color and low-income communities rarely materialize upon real-life service.

An Army of None is a comprehensive guide to counter-recruitment campaigns-from personal counseling to legislative change to direct action. More hands-on and sustainable than other antiwar activities, the counter-recruitment movement offers a provocative vision for the future and has the potential to create deep positive social change and de-militarize our schools, country, and the world at large.

An Army of None is an unprecedented and practical resource for activists, containing compelling photos and artwork, spoken word, sample fact sheets, how-to guides, lobbying directions, resource lists, and ideas for direct action. It provides a frightening look into the world of military recruitment that everyone in the United States should know about, and the hopeful stories, inspiration, and tools necessary to do something about it. 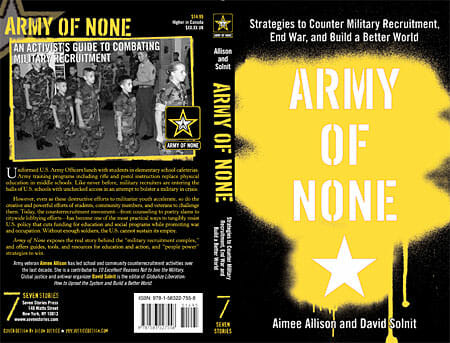 Select for more information, including table of contents and first chapter. PDF, 6 MB.

Anti-war, global justice and arts organizer DAVID SOLNIT was a main organizer in the WTO protests in Seattle in 1999 and in San Francisco the day after Iraq was invaded in 2003.He is the editor of Globalize Liberation: How to Uproot the System and Build a Better World. After serving four years as a combat medic in the Army Reserves, AIMEE ALLISON earned an honorable discharge as a conscientious objector during the Persian Gulf War. She now serves on the steering committee of San Francisco’s College Not Combat Initiative. 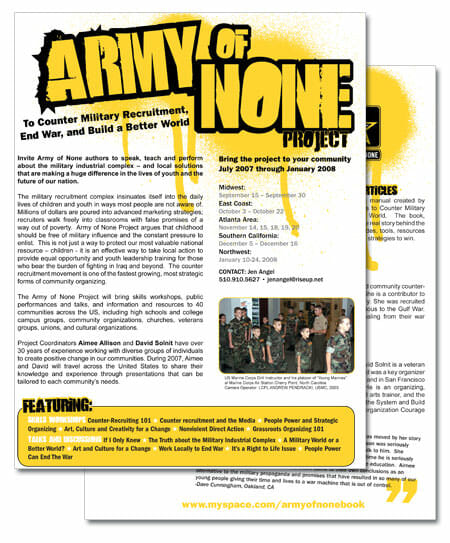