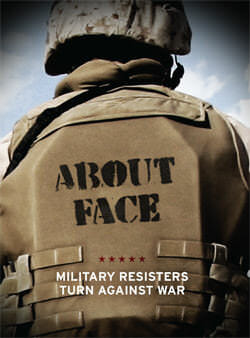 The Courage to Resist book, About Face: Military Resisters Turn Against War from PM Press (Aug 2011) features the voices from our audio project with exclusive interviews with Noam Chomsky and Daniel Ellsberg discussing the history of GI resistance from the Vietnam War to Bradley Manning and the current WikiLeaks revelations.

How does a young person who volunteers to serve in the U.S. military become a war-resister who risks ostracism, humiliation, and prison rather than fight? Although it is not well publicized, the long tradition of refusing to fight in unjust wars continues today within the American military.

In this book, resisters describe in their own words the process they went through, from raw recruits to brave refusers. They speak about the brutality and appalling violence of war; the constant dehumanizing of the enemy—and of our own soldiers—that begins in Basic Training; the demands that they ignore their own consciences and simply follow orders. They describe how their ideas about the justification for the current wars changed and how they came to oppose the policies and practices of the U.S. empire, and even war itself. Some of the refusers in this book served one or more tours of duty in Iraq and Afghanistan, and returned with serious problems resulting from Post-Traumatic Stress Disorder. Others heard such disturbing stories of violence from returning vets that they vowed not to go themselves. Still others were mistreated in one way or another and decided they’d had enough. Every one of them had the courage to say a resounding “NO!” The stories in this book provide an intimate, honest look at the personal transformation of each of these young people and at the same time constitute a powerful argument against militarization and endless war.

Also featured are exclusive interviews with Noam Chomsky and Daniel Ellsberg. Chomsky looks at the U.S.-led wars in Iraq and Afghanistan and the potential of GI resistance to play a role in bringing the troops home. Ellsberg relates his own act of resistance in leaking the Pentagon Papers in 1971 to the current WikiLeaks revelations of U.S. military secrets.

What people are saying about About Face

“About Face gives us important insights into the consciences of women and men who volunteer for the military but find they cannot obey orders to fight in illegal wars. These are brave and loyal Americans who are willing to challenge the U.S. government and perhaps go to jail rather than betray their inner voices that say NO to these wars!” —Ann Wright, retired U.S. Army colonel and diplomat who resigned in protest of the invasion of Iraq, author of DISSENT: Voices of Conscience

“About Face pulls down the veil of what honorable service in today’s U.S. military really means. When new soldiers swear to support and defend the U.S. Constitution by following lawful orders, what are they to do when they are given unlawful orders? About Face provides raw examples of precisely what soldiers are doing who take their oath seriously.” —Dahr Jamail, author of The Will to Resist: Soldiers Who Refuse to Fight in Iraq and Afghanistan

“During this time of war it is vital that every American take a moment to listen to the first-hand accounts of those who have served on the front lines and those who refuse to fight.” —Aaron Glantz, author of The War Comes Home: Washington’s Battle Against America’s Veterans

“It was a privilege to read this book. As a veteran, it was especially meaningful to me because I know some of the participants personally. It certainly opened my eyes and heart to their struggle. I know that it will have the same impact to everyone who reads it. It is especially compelling because it gives a wonderful cross-section of veterans in their struggle with the Iraq and Afghanistan Wars.” —Dennis Lane, former executive director, Veterans for Peace

“This book documents the resistance of American heroes—resistance to illegal wars, to immoral wars, and to government secrecy, that threaten the very foundation of our democracy. A must-read for every American.” —Marjorie Cohn, co-author, Rules of Disengagement: The Politics and Honor of Military Dissent 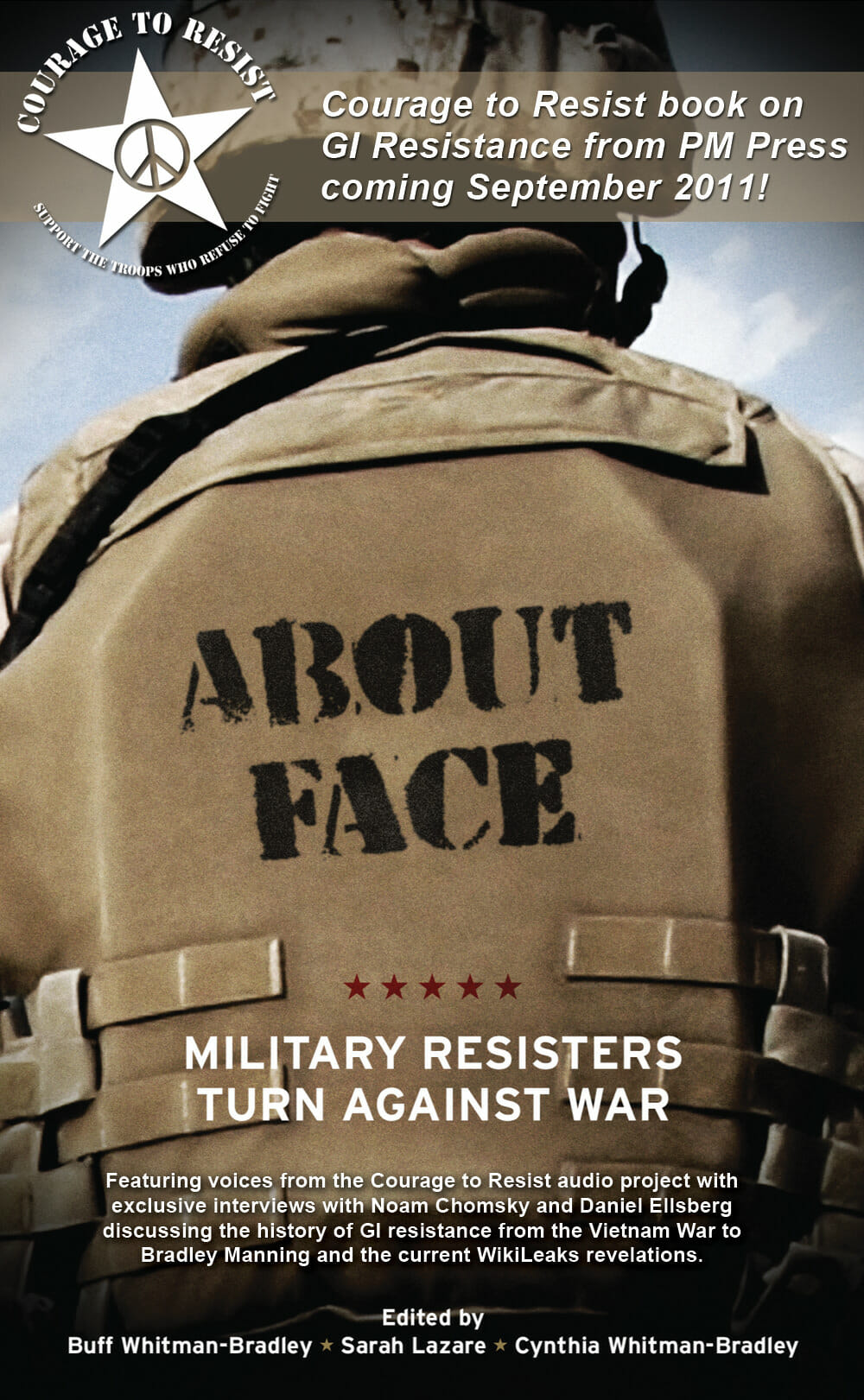 Buff Whitman-Bradley, a long-time peace and social justice activist, has been working with Courage to Resist since 2003. He has been a member of the CtR organizing collective, and was the originator and producer of the Courage to Resist Audio Project. He is also a member of ¡Presente! a non-violent direct action affinity group actively opposing war and empire. He has worked for many years as a professional writer and editor, authored and edited educational books and materials, non-fiction books for children, and books of poetry. He has co-produced and directed two documentary films, Por Que Venimos, and with his partner Cynthia, an award-winning documentary about visitors to death row, Outside In.

Sarah Lazare is a writer and organizer in the U.S. anti-war and GI resistance movement, as a member of The Civilian-Soldier Alliance and Courage to Resist. She is also a co-organizer of the “Dialogues Against Militarism” U.S. war resister delegation to Palestine/Israel, to show support for Israeli youth refusing to join the military and Palestinians resisting occupation. Sarah is active in economic and social justice organizing in the U.S. and seeks to connect domestic struggles for justice and liberation with global movements against U.S. war and empire. She is also an independent journalist, writing articles for publications ranging from The Nation to Truthout to Al Jazeera English.

Cynthia Whitman-Bradley has been a member of Courage to Resist since 2003 and served on the organizing collective from 2003 to 2009. As one of the members of the affinity group, ¡Presente!, she has participated in many direct actions to stop the wars in Afghanistan and Iraq. With her partner, Buff Whitman-Bradley, she co-produced the documentary, Outside In, which tells the stories of those who visit condemned prisoners on California’s death row. She is a former elementary school and preschool teacher and currently supports women during childbirth as a birth doula.