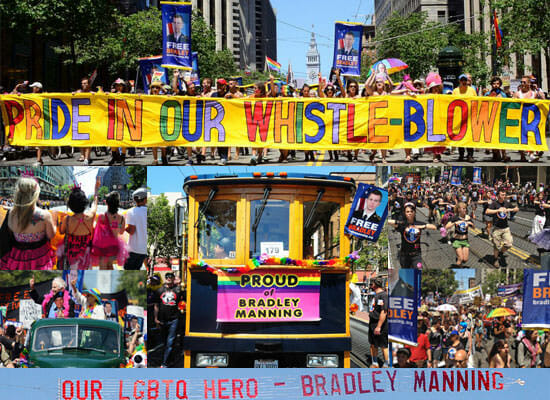 SAN FRANCISCO – July 1 – Over 1,000 supporters of openly gay whistle-blower, PFC Bradley Manning, marched in the Bradley Manning Support Network contingent in the SF Pride Parade today, organized in collaboration with Courage to Resist. The anchors of KOFY TV’s live coverage noted that it was the largest non-corporate contingent in the Parade, second only to Google overall.

The contingent featured dozens of supporters riding a trolley car, the Brass Liberation Orchestra marching band, and a synchronized dance group doing a routine to Michael Jackson’s “They don’t care about us”. High above Market Street, an airplane dragged a banner reading “Our LGTBQ Hero – Bradley Manning”.

Community activists and LBGTQ leaders spent two months battling with the SF Pride Board insisting that Manning be reinstated as a Grand Marshal after the Board rescinded his honor. Among the marchers was SF Pride’s legal counsel, Brooke Oliver, who recently resigned after 15 years because of the SF Pride Board’s handling of the Manning debacle. Bevan Dufty, former SF Supervisor and now the mayor’s point person on homelessness, stepped down as a Grand Marshal, also because of the Board’s actions.

Hundreds of supporters later packed the Roccapulco night club for an after party fundraiser for Manning’s legal fees.

This is the third consecutive year that the Bradley Manning Support Network and Courage to Resist has organized a Manning contingent in the SF Pride Parade, but this year’s numbers far surpassed the previous two. 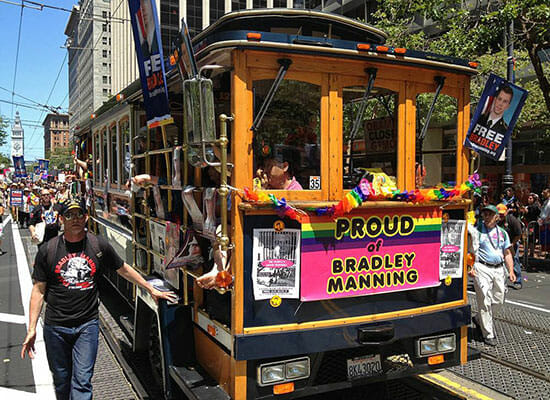