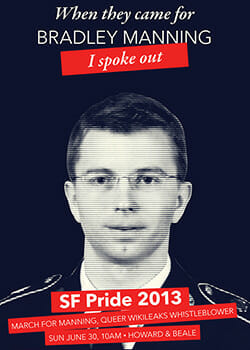 UPDATE: We have been assigned slot 179 (out of about 250). While organizers will be at Howard and Beale at 10:00am as planned, it is very unlikely that the contingent will step off before noon. We encourage folks to join us at 11:00am. Our actual staging area is on Beale Street, between Howard and Mission. Arriving by BART will be the best transit option for most.

Come Out for Our LGBTQ Whistle blower PFC Bradley Manning at the 2013 SF Pride Parade! You are invited to join our official, fabulous, and epic, contingent for the SF Pride People’s Grand Marshal Bradley Manning! Music by Kaimera & the Brass Liberation Orchestra. Featuring Daniel Ellsberg, and a motorized cable car for those who can’t walk.

Come celebrate the radical heritage and original spirit of Pride by joining the contingent in support of a heroic Queer army intelligence analyst who sacrificed everything so we could all know the truth about US wars and foreign policy by leaking classified information that revealed war crimes, torture, lies, corruption, spying, bribery, false imprisonment and much more to the Wikileaks whistle blowing website.

This year’s Pride falls in the midst of a military court martial this summer where PFC Manning’s entire life will quite literally be on the line. This will be the most crucial time to show support for this young hero, especially from the LGBTQ community. By marching with us we will not only be supporting Manning but challenging an entire system of oppression at home and abroad. LGBTQ liberation is integrally tied to the collective liberation of all oppressed groups. Despite the SF Pride Board publicly maligning and rescinding Manning as a Grand Marshal, members of the San Francisco LGBTQ, military veteran and activist community have named Bradley Manning the 2013 San Francisco Pride People’s Grand Marshal & we will be marching in solidarity & in mass. Free Bradley Manning, our communities and the world!

Manning is in prison for us! Let’s come out for him!

We are calling on all individuals, groups and organizations to endorse and join us in the march. If you can’t be in our contingent and want to support PFC Manning we ask that people hold Free Bradley Manning signs in their contingents. For endorsements, materials, questions and details contact [email protected]