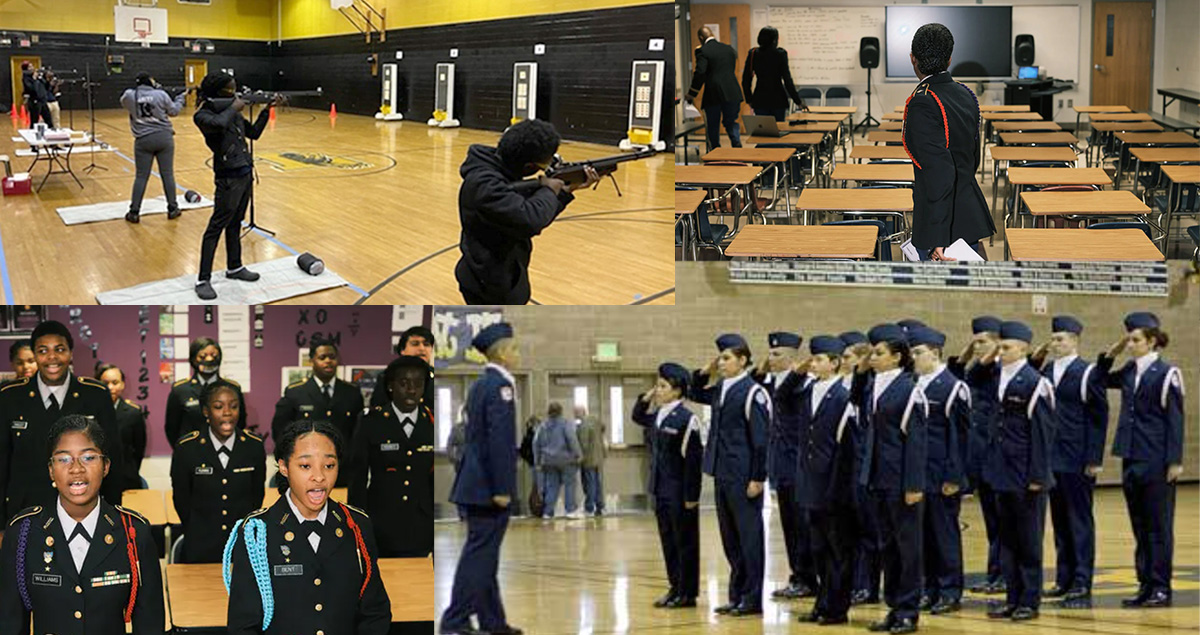 Thousands of Teens Are Being Pushed Into Military’s Junior R.O.T.C.

In high schools across the country, students are being placed in military classes without electing them on their own. “The only word I can think of is ‘indoctrination,’” one parent said.

DETROIT — On her first day of high school, Andreya Thomas looked over her schedule and found that she was enrolled in a class with an unfamiliar name: J.R.O.T.C.

She and other freshmen at Pershing High School in Detroit soon learned that they had been placed into the Junior Reserve Officers’ Training Corps, a program funded by the U.S. military designed to teach leadership skills, discipline and civic values — and open students’ eyes to the idea of a military career. In the class, students had to wear military uniforms and obey orders from an instructor who was often yelling, Ms. Thomas said, but when several of them pleaded to be allowed to drop the class, school administrators refused.

“They told us it was mandatory,” Ms. Thomas said….

A review of J.R.O.T.C. enrollment data collected from more than 200 public records requests showed that dozens of schools have made the program mandatory or steered more than 75 percent of students in a single grade into the classes, including schools in Detroit, Los Angeles, Philadelphia, Oklahoma City and Mobile, Ala. A vast majority of the schools with those high enrollment numbers were attended by a large proportion of nonwhite students and those from low-income households, The Times found.

In Chicago, concerns raised by activists, news coverage and an inspector general’s report led the school district to backtrack this year on automatic J.R.O.T.C. enrollments at several high schools that serve primarily lower-income neighborhoods on the city’s South and West sides. In other places, The Times found, the practice continues, with students and parents sometimes rebuffed when they fight compulsory enrollment.

“If she wanted to do it, I would have no problem with it,” said Julio Mejia, a parent in Fort Myers, Fla., who said his daughter had tried to get out of a required J.R.O.T.C. class in 2019, when she was a freshman, and was initially refused. “She has no interest in a military career. She has no interest in doing any of that stuff. The only word I can think of is ‘indoctrination.’”

J.R.O.T.C. classes, which offer instruction in a wide range of topics, including leadership, civic values, weapons handling and financial literacy, have provided the military with a valuable way to interact with teenagers at a time when it is facing its most serious recruiting challenge since the end of the Vietnam War….

Critics have long contended that the program’s militaristic discipline emphasizes obedience over independence and critical thinking. The program’s textbooks, The Times found, at times falsify or downplay the failings of the U.S. government. And the program’s heavy concentration in schools with low-income and nonwhite students, some opponents said, helps propel such students into the military instead of encouraging other routes to college or jobs in the civilian economy.

“It’s hugely problematic,” said Jesús Palafox, who worked with the campaign against automatic enrollment in Chicago. Now 33, he said he had become concerned that the program was “brainwashing” students after a J.R.O.T.C. instructor at his high school approached him and urged him to join the classes and enlist in the military.

“A lot of recruitment for these programs are happening in heavy communities of color,” he said….

In analyzing data released by the Army, The Times found that among schools where at least three-quarters of freshmen were enrolled in J.R.O.T.C., over 80 percent of them had a student body composed primarily of Black or Hispanic students. That was a higher rate than other J.R.O.T.C. schools (over 50 percent of them had such a makeup) and U.S. high schools without J.R.O.T.C. programs (about 30 percent).

For some districts examined by The Times, it was difficult to discern whether a school required J.R.O.T.C. or if some other reason had led a large percentage of its freshmen to enroll in the program.

In Detroit, where Ms. Thomas said she had been forced to take the class, the district said in a statement that administrators did not require students to take J.R.O.T.C. although they “do encourage students in ninth grade to take the course to spark their interest.” But two recent students at Pershing, in addition to Ms. Thomas, said in interviews that they had been required to take the class. District data showed that 90 percent of freshmen were enrolled in J.R.O.T.C. during the 2021-22 school year….

In Pike County, Ala., which automatically enrolls all freshmen in J.R.O.T.C., administrators said the program’s focus on character and leadership had helped students improve their study habits and increase their involvement in other school programs.

In Philadelphia, a district spokeswoman said that one school in the district, Martin Luther King High School, automatically enrolled all freshmen into J.R.O.T.C. to expose them to possible military careers and “to create a culture of teamwork, collaboration and discipline.” Star Spencer High School in Oklahoma City said it placed all freshmen in J.R.O.T.C. at the start of the school year in part because of a shortage of physical education teachers….

William White, a retired Army major who taught for years as a J.R.O.T.C. instructor in three states, said he found during his time in Florida that there was a constant emphasis on keeping enrollment elevated, with students required to take the class even when they were so opposed to it that they refused to do the work.

“Kids were forced into the program,” he said, adding that he faced blowback after trying to get students removed who did not want to be there.

The program has also led to pushback from civilian teachers, some of whom have been uncomfortable with military posters and recruiters on campus and the curriculum taught in J.R.O.T.C. classes….

Sylvia McGauley, a former high school history teacher in Troutdale, Ore., said she was troubled when she found that the J.R.O.T.C. textbooks being used at her school were teaching “militarism, not critical thinking.”

An investigation by the school district’s inspector general found that 100 percent of freshmen had been enrolled in J.R.O.T.C. at four high schools that served primarily low-income students on [Chicago’s] South and West sides.

It was “a clear sign the program was not voluntary,” the report said.

At many schools, it said, freshman enrollment in J.R.O.T.C. “often operated like a prechecked box: students were automatically placed in J.R.O.T.C. and they had to get themselves removed from it if they did not want it. Sometimes this was possible; sometimes it was not.”…

In 2008, parents and other residents in San Diego confronted school district officials over concerns about forced enrollment, and won what they believed was a promise by the district to ensure that the program would be strictly optional. They also worked to eliminate J.R.O.T.C. air rifle programs in the schools.

But The Times’s review of data provided by the school district found that there continued to be schools with high J.R.O.T.C. numbers, with 77 percent of freshmen enrolled in the program at Kearny School of Biomedical Science and Technology last year. A district spokeswoman said that the data the district had provided had “some inaccuracies” but over the past several weeks did not provide new enrollment numbers and would not comment further.

“It’s almost like trying to kill a vampire,” said Rick Jahnkow, who has worked for three decades to oppose military recruitment in San Diego’s schools. “You think that you dispensed with it, and it keeps coming back.”

Schools With J.R.O.T.C. Enrollment of at Least 75% in Certain Grades