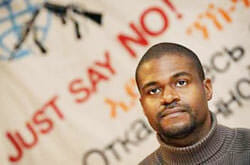 On September 12, 2015, in Frankfurt/Main the foundation, PRO ASYL will present its this year’s human rights award to the U.S. AWOL soldier and asylum candidate in Germany, André Shepherd. The international conscientious objector network, Connection e.V., salutes this decision.

“A tremendous amount of courage is required to oppose the Iraq War as André Shepherd did”, declared Rudi Friedrich today for Connection e.V.  “Until today, André Shepherd has still unsuccessfully tendered hopes of receiving a positive ruling concerning his asylum case. With his refusal to participate in crimes against humanity, he clearly not only questions the legality of the Iraq War, but also shows that this legally legitimate decision against participation in war should be supported through a granting of asylum.”

In the invitation for the presentation of this award PRO ASYL declared: “With his application for asylum, André Shepherd assumes in this case the burden of establishing a legal precedence. Through his persistent resistance, he has risked his right to a normal existence in the United States. Almost eight years after his decision to seek asylum, André Shepherd continues to argue his case in court, knowing that his example is also that of the many servicemen resisting illegal wars. His efforts have made him a paragon of resolution and humanity. The foundation PRO ASYL gratefully presents him the 2015 PRO ASYL-Hand Award.