Chelsea Manning: Solitary for her books and toothpaste?! 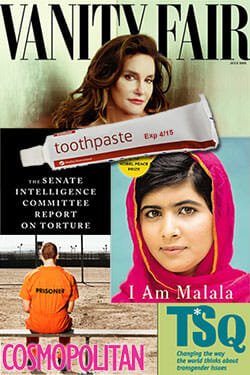 Just heard from Chelsea following her hearing: “I was found guilty of all 4 charges @ today’s board; I am receiving 21 days of restrictions on recreation–no gym, library or outdoors.”

So while she was convicted of all four crimes (yes, even the expired toothpaste!), she did not receive any time in solitary confinement. We believe that had everything to do with the outpouring of support for Chelsea, and the attention focused on the Fort Leavenworth board.

Chelsea added, “Now these convictions will follow me thru to any parole/clemency hearing forever. Was expecting to be in min custody in Feb, now years added.” So, this is good news, but not without significant ramifications.

Chelsea faces this incomprehensibly severe punishment as a result of ridiculously innocuous institutional offenses, including the possession of books and magazines related to politics and LBGTQ issues (which she received openly via the prison mail system), and having a tube of toothpaste that was past its expiration date–deemed “medical mis-use”. The catalyst for this attack on Chelsea seems to have been an incident in the mess hall where she may have brushed, or accidentally knocked, a tiny amount of food off of her table. When aggressively confronted by a guard, she asked to speak to her lawyer. Read the actual charge sheet for yourself here via Chelsea’s Twitter account–here are a few more pages. No, we are not kidding.

In a currently breaking Associated Press story, Chelsea’s lead attorney Nancy Hollander explains, “Prisons are very controlled environments and they try to keep them very controlled and sometimes in that control they really go too far and I think that this is going too far. … [These events] could impinge on her free speech rights and be an attempt to silence her.”

Ms. Hollander notes that she is particularly troubled by the fact that Chelsea’s reading material was taken away, including a novel about transgender issues, the book “Hacker, Hoaxer, Whistleblower, Spy — The Many Faces of Anonymous,” the book “I am Malala,” an issue of Cosmopolitan magazine containing an interview with Manning and the US Senate report on CIA torture.

Our friends at Fight for the Future have created a petition where you can sign on to a letter condemning the US Army’s attack on Chelsea.

Last week, before the US Army concocted this new attack on Chelsea, we launched a new effort today to finish paying for her critical legal representation. This will be critical for not only next week’s hearing, but for challenging her unjust Espionage Act conviction and draconian 35-year jail sentence.

Last week we raised $23,000 of the remaining $45,000 needed for Chelsea’s legal appeal. Thank you immensely to anyone who contributed, or who gave recently via our friends at the Freedom of the Press Foundation, who have put us within sight of our goal. For more options and information about donating to Chelsea’s defense, click here.