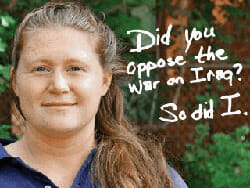 Under public pressure, Balboa Medical Center reversed it’s stated policy and allowed Mario Rivera to be at wife’s side during the delivery of their son Matthew last night. War resister Kimberly Rivera is currently serving a ten month military prison sentence for having taken her family to Canada in order to refuse redeployment to Iraq in the early days of the illegal and immoral invasion.

“We wanted to say a quick thank you to all who wrote letters and place phone calls in response to  our previous call to action . Mario was allowed to be in the delivery room during the birth of his child! Kim and Mario’s son Matthew was born healthy and strong. Kim is doing well too and is being allowed to breastfeed while in the hospital. We do not yet know if she will continue to be allowed to breastfeed once she is back at Miramar but we are hopeful that the authorities will do the right thing,” shared Kimberly’s attorney James Branum today.

Supporters are asked to write letters to Fort Carson Senior Commander Brig. Michael A. Bills urging him to act positively on Kimberly Rivera’s pending request for clemency. If clemency is not granted, Kim will be needlessly separated from her baby Matthew when she is transferred from the hospital back to the nearby Miramar Navel Brig in the coming days. We had initially hoped that Cmdr. Bills would have approve the 45 day requested reduction in sentence prior to Kimberly going into labor.