Tear down the walls! 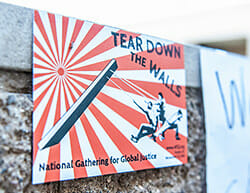 Members of the Courage to Resist collective and the Private Manning Support Network joined organizers and activists from across the country  earlier this month at the Tear Down the Walls Conference hosted by the Alliance for Global Justice in Tucson, Az.

Campaign assistant Farah Muhsin and organizer Michael McKee facilitated a workshop on GI resistance and the Manning case, informing supporters of the next steps in the fight to win justice for Chelsea Manning.

Additionally, Farah and Michael joined Cindy Sheehan and delegates from School of the Americas Watch, U.S. Labor Against the War and others in leading a panel on “Imperialism & Militarization” in the U.S. and abroad. Discussions from this panel continue now, working towards a coordinated day of action in 2014. Get in touch to find out how you can get involved in organizing in your area.

Modeled in part on the U.S. Social Forum, Tear Down the Walls, drew people working on many different of issues (ranging from immigrant rights to prison abolition and demilitarization) in order to discuss how to better integrate our varied but interconnected struggles. In addition to Courage to Resist and the Manning Support Network, groups and presenters such as Gerry Condon (Project Safe Haven), Michael Prysener (March Forward) and the “Who Are America’s Political Prisoners” workshop kept GI resistance and Manning’s case featured prominently into the three-day conference.