School of the Americas report back 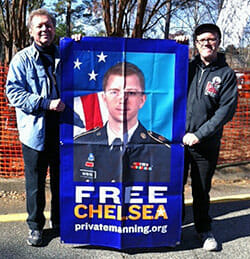 Since 1990, many thousands of people from all walks of life have gathered each November to protest the School of the Americas at Ft Benning, Georgia. The three-day convergence has served as a valuable time for educating, inspiring and mobilizing as well as a chance for people working on various social justice issues to network with one another.

This year, Courage to Resist’s Michael McKee (pictured right with Roy Bourgeois) with joined the thousands of people attending this year’s annual gathering, tabling at the weekend’s events and hosting a workshop articulating the intersections between GI resistance, Chelsea (formerly Bradley) Manning’s WikiLeaks revelations and U.S. foreign policy. Along with guest appearances from retired Col. Ann Wright, numerous veterans, and members of the Washington, DC-based Center for Conscience and War, the workshop included an extended and lively discussion with supporters from across the United States.

Thanks to some help from the Tallahassee chapter of Veterans for Peace, nearly everyone at the final mass demonstration at the Ft Benning gate proudly represented with a “Free Chelsea Manning” sticker, while the team collected some 700 new signatures for our petition for a presidential pardon. 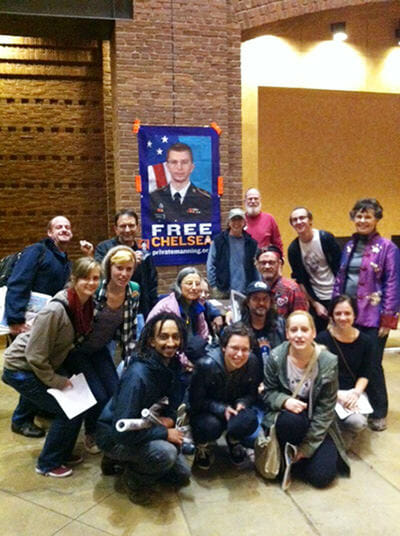 For decades, the U.S. Army’s School of the Americas, which officially changed its name to WHINSEC (Western Hemisphere Institute for Security Cooperation), has trained soldiers from Central and South American countries in counterinsurgency and torture tactics directed all too often at persecuting civilians. These same “dirty war” tactics were exposed by Pvt. Chelsea Manning in Iraq, as explored by a recent BBC-Guardian documentary.