Whistleblowing is not a crime 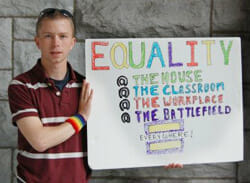 I’m old enough to remember when Daniel Ellsberg blew the whistle on the lies of the Johnson administration about the Vietnam War and became an instant poster child for the antiwar movement. Ellsberg’s “Pentagon Papers,” which included top-secret documents he had access to as an employee at the RAND Corporation (a military think-tank), revealed that then-President Lyndon Johnson knew that the war could not be won and that many more lives would be needlessly sacrificed.

Now, another whistleblower has become a poster child for the antiwar movement. He is Bradley Manning, a 22-year-old private in the U.S. Army who has amassed the largest unauthorized pile of military classified info ever, some of it already posted on WikiLeaks, a website for whistleblowers. Manning, a former intelligence analyst in Baghdad, is also reputed to be gay and came out on facebook against the military’s ridiculous Don’t Ask Don’t Tell (DADT) policy.

Manning’s leaked material includes a disturbing video of an Apache helicopter firing on 11 men, among them a Reuters news photographer and his driver, all of whom died, none of whom had any bombs or other weapons. Two children were also wounded in that attack. One crew member callously quips afterwards, “Oh, yeah, look at those dead bastards.” The 2007 video is called “Collateral Murder.”

Formally charged by the military, Manning now faces a court martial and a possible 52 years in prison. The soldiers who murdered the 11 innocent people in the video are facing no charges.

At a recent rally in support of Manning, peace demonstrators shouted “Blowing the whistle on war crimes is not a crime.” The slogan also appears on buttons and posters produced by Courage to Resist, a group based in Oakland that is raising money to hire an attorney to defend Manning. Documentary maker Michael Moore (director of “Fahrenheit 9/11” and “Sicko,” among many others) has given $5,000.

Project Director Jeff Paterson told AP: “I think we have an imperative to support those people who’ve seen the horrors of battle and want to share that reality with the American people.”

I couldn’t agree more. But that support needs to come from the queer community as well.

Already, right-wingers are using the fact that Manning is gay as a way to discredit him and reenforce their opposition to eliminating DADT. One conservative “news” source (One News Now) has characterized Manning as “an open homosexual who apparently held a grudge against the U.S. military for its law excluding homosexual military service.” The statement has no basis in reality.

The same article asserts that Manning “is not only openly homosexual but also considering a sex change.” As if being transsexual is worse than being gay.

LGBT community leaders should speak out in favor of Manning and denounce the obvious homophobia and transphobia of these right-wingers.

They should join the growing list of supporters of a brave man who is helping to show the world what’s really going on in war zones with embedded reporters who long ago lost any sense of what it means to be journalists. Even when their fellow reporters are gunned down in cold blood because a camera is mistaken as a bomb.

Queers should support Manning not only because he’s gay and did the right thing in blowing the whistle, but also because we can’t condone the atrocities being perpetrated in all of our names.

Tommi Avicolli Mecca is co-editor of Avanti Popolo: Italians Sailing Beyond Columbus, and editor of Smash the Church, Smash the State: The Early Years of Gay Liberation, which was nominated for both an American Library Association and a Lambda Literary award. His website is www.avicollimecca.com.