Questioning the war? You are not alone. 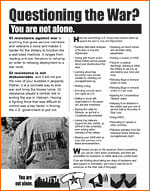 "GI resistance against war is anything that gives service members and veterans a voice and makes it harder for the military to function like a well-oiled machine. It ranges from reading anti-war literature to refusing an order to refusing deployment to a war zone. GI resistance is not dishonorable, and it will not put the lives of your buddies in jeopardy. Rather, it is a concrete way to end war and bring the troops home. GI resistance played a central role in ending the war in Vietnam. Having a fighting force that was difficult to control was a key factor in forcing the U.S. government to pull out…"

The back side of leaflet lists contact information for various organizations that support GI resistance.

View, save, and print outreach leaflet 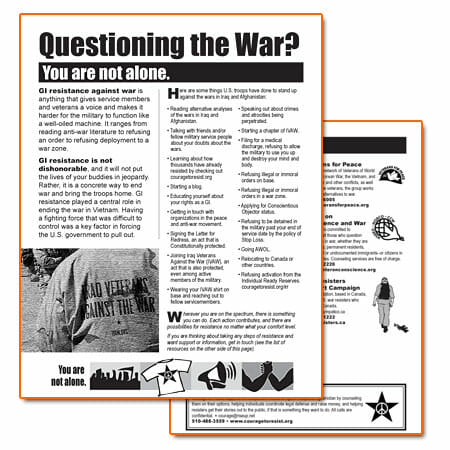