Pride 2014: We stand with Chelsea Manning 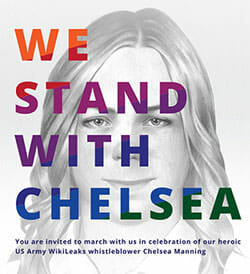 This summer, we are once again marching in celebration of our heroic US Army WikiLeaks whistle-blower Chelsea Manning in Gay Pride events across the United States. Last year, our San Francisco Pride contingent was awarded the “Most Fabulous” award–the highest honor given. Over 1,500 people made the contingent one of the largest in the history of SF Pride, the largest Gay Pride parade on Earth. This year, Chelsea is an official Grand Marshal of SF Pride! Chelsea Manning contingent are also confirmed for Los Angeles, Seattle, and New York City.