Veterans Call on the Minnesota National Guard to Stand Down 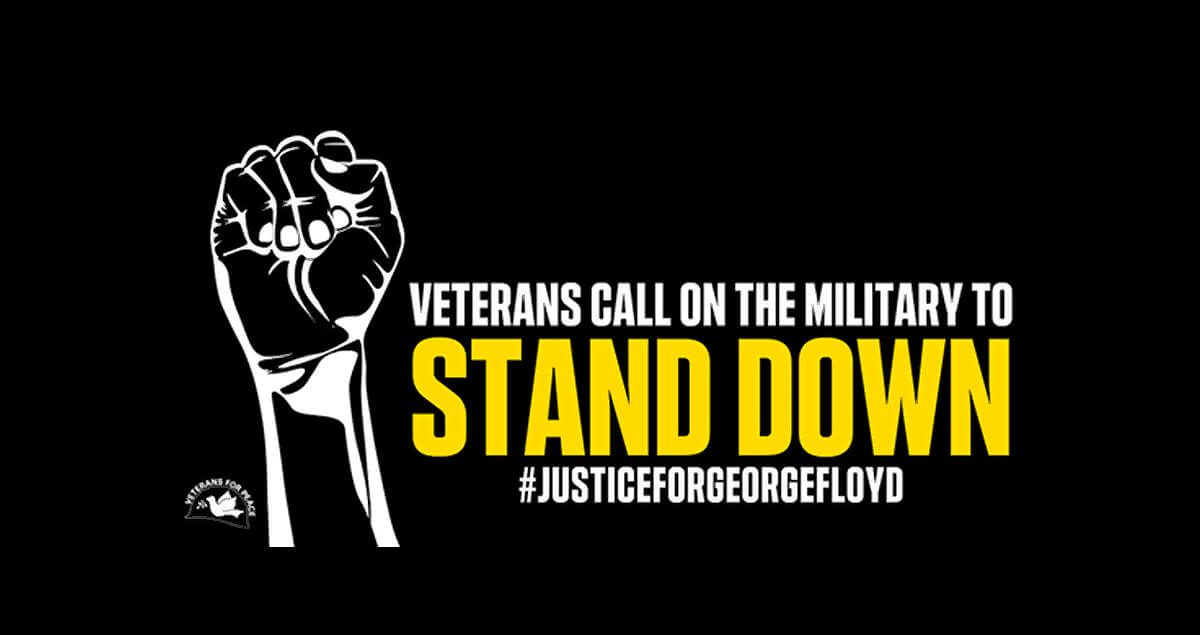 By Veterans For Peace

Veterans For Peace calls for the immediate withdrawal of the Minnesota National Guard. We are appalled to see military weapons, vehicles and equipment once again deployed in U.S. cities to control community members who are reacting to a long history of state-sanctioned violence. When an already embattled community is subjected to militarized intimidation, by design, their environment becomes a war zone. We call on all those who are serving with the National Guard to refuse to serve violent and racist interests.

Veterans For Peace denounces the ongoing instances of police violence against Black bodies and people of color, this time resulting in the killing of George Floyd in Minneapolis, Minnesota. We also stand in opposition to the State of Minnesota’s and the Minneapolis police force’s militarized response to the right to protest.

Learning nothing from the now seemingly endless examples of ineffective attempts to silence protests with militarized violence—from Ferguson to Baltimore to New Orleans to Standing Rock—political figures continue to call on more military to quell the powerful resistance seen from the people in Minneapolis who demand justice. We continue to see the escalation of threats of violence from those in power–from Trump’s tweets threatening to shoot protestors to the governor’s decision to send in the national guard.

As Veterans For Peace, we know that increased militarization in our communities will never bring peace. We know that peace is only achieved with a strong commitment to justice. As veterans who served in various wars, we know there is a connection between increasing racist violence in the United States and the massive indiscriminate killing of hundreds of thousands of people in other lands. Growing racism against black, brown and Muslim people in the United States is a reflection of the racism that justifies killing non-white people abroad. The U.S. military deliberately uses racism to motivate young men and women to kill.

As veterans, we know what it’s like to be called to a “duty” that goes against our conscience. We urge all current National Guard members to lay down their weapons and refuse to fight against their neighbors and fellow community members. We urge you all to be fully informed as you make profound choices with possibly serious consequences. We urge any troops facing possible deployment to Minneapolis or already there to contact the National Lawyers Guild Military Law Task Force at (619) 463-2369 and/or [email protected] for referral to a civilian attorney to discuss your options.

Our nation’s consistent option for militarization and the use of deadly force when it is not needed—at home and abroad—is exactly why we find ourselves in this situation. It makes no sense to think more violence and trauma heaped upon the Minneapolis community will quell the unrest. The Governor has moved beyond using a militarized police force to using the military. He is relying on intimidation and fear to end this. The only thing that will quiet this storm is justice.

Donate to organizations on the ground: