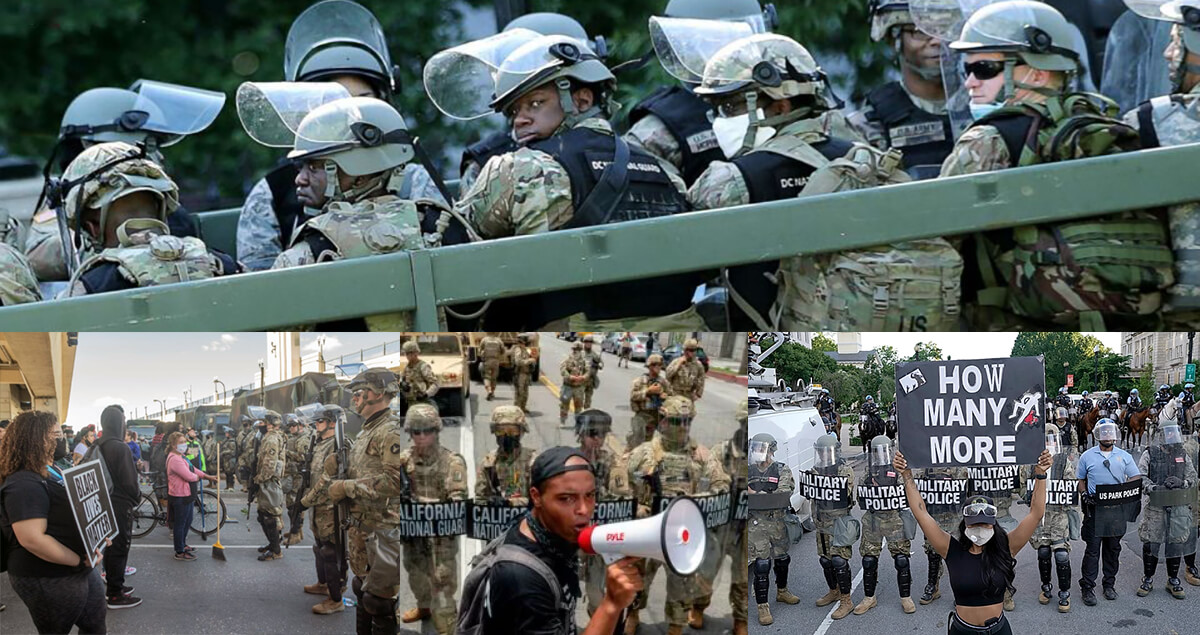 Courage to Resist is currently assisting members of the National Guard who resisted Trump’s orders to violently attack people on the streets of Washington DC peacefully and lawfully protesting racial injustice. Now that Trump is threatening to use the 1807 Insurrection Act to send active-duty troops in cities across the US, it’s time for every member of the military to search their conscience. We want to make sure we’re there to support the brave men and women who continue to refuse these illegal orders.

One Guardsmen who is resisting Trump’s orders originally hoped to join medical missions assisting in natural disasters. Addressing the current situation he says, “I can’t do it. Even looking at my uniform is making me feel sick that I’m associated with this, especially after [the National Guard unit] shot that man who owned that barbecue shop [in Louisville, Kentucky]. I live in Pennsylvania. I live with the history of Kent State. I’m not being a part of that.”

Another shared, “I feel that I cannot be complicit in any way when I’ve seen so many examples of soldiers and police acting in bad faith … No aspect of my training has touched on this subject … We have not had any training or conversation relating to de-escalation tactics.”

“Using the military to put down protests and supplement the botched efforts of the police to control these protests, particularly through unlawful uses of force, will only further inflame the protests,” shared a National Guard noncommissioned officer with the Military Times.

Our Message to Members of the National Guard and US Military Forces:

Tens of thousands of National Guard members have already been mobilized in at least 29 states.

If you know you didn’t join the National Guard to attack Americans who are using their freedom of speech and right to assemble to protest systemic racism and police violence, then now is your time to resist and stand with the people. For some troops, that means publicly raising your voice. For others, it’ll mean not showing up to beat down and shoot protesters. There are many paths of nonviolent resistance.

Commander in Chief President Trump is failing to uphold the U.S. Constitution by embracing white supremacists and legacy of the Confederacy. Most recently, he’s even called for anti-facism — the defining motivation for the war against Nazi Germany — to be outlawed. This week he ordered the violent assault on peaceful protesters in front of the White House for a photo op. But, we want you to know that you don’t need to be complicit in next week’s brutality.

Since 2005, Courage to Resist has worked closely with members of the military who have refused to fight in unjust wars of empire abroad. Along with our allies, including Veterans For Peace, About Face: Veterans Against the War (formerly IVAW), the GI Rights Hotline, and others, we’ve successfully defended hundreds of objectors, including Army Lt. Ehren Watada and PFC Chelsea Manning.

Now, we’re providing legal assistance and logistical aid to military members (including officers and enlisted members) who are refusing to fight people living in the United States engaged in First Amendment activities. Please get in touch if you would like to learn more about how we can help your situation.

Members of the National Guard: To learn about your options for resisting orders to attack protesters on U.S. soil, contact Courage to Resist!

Be prepared to support public objectors in the days to come, and help us fund legal defense efforts and expenses today. For resisters who choose to resist publicly, we will help them tell their stories as a powerful statement to others, and advocate for their defense as best we can. Others may resist in quieter yet still effective ways, and for those we will provide confidential counseling and connections with resources. Please contribute today so that we will be prepared to help all who resist the current illegal orders, as well as all of our nation’s imperial wars and interventions.