Marine Benjamin “Benji” Lewis served two tours in Iraq and was honorably discharged in 2007. Recently, he received notification that he was a candidate to be recalled to active duty. Last week at a Winter Soldier event in Portland, Oregon, Lewis publicly announced his intention to refuse reactivation from the Inactive Ready Reserve (IRR). Ten days before that event, Lewis spoke with Courage to Resist. 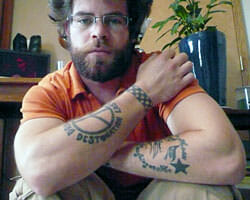 Benjamin Lewis can be reached at corvallisivaw -at- gmail.com