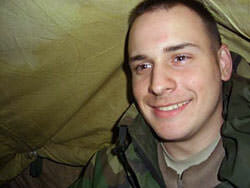 By Sarah Lazare, Courage to Resist for AlterNet. October 23, 2008

“I believe war is the crime of our times,” Blake Ivey, a specialist in the U.S. Army, said over the phone in a slow, deliberate voice.

Ivey, currently stationed in Fort Gordon, Ga., is publicly refusing to deploy to Afghanistan. The 21-year-old soldier filed for conscientious objector status in July but was ordered to deploy while his application was being processed. He is determined not to go, and as of our last phone call, was still actively serving on his base, weighing his options for refusal.

Ivey joins what appears to be a growing number of troops refusing to fight in the so-called Global War on Terror. While there is no way to tell the exact number of resisters, military statistics indicate that resistance is on the rise. Since 2002, the Army has court-martialed twice as many soldiers for desertion and other unauthorized absences per year than for each year between 1997 and 2001. The Associated Press reports AWOL rates in the Army at its highest since 1980, with the desertion rate (defined as 30 or more days of unauthorized absence) having jumped 80 percent since the start of the Iraq War. More than 150 soldiers have publicly refused to fight in the wars in Iraq and Afghanistan, and an estimated 200 war resisters are living in Canada.

Many war resisters are conscientious objectors (C.O.s) who were deterred at early stages of the C.O. application process or ordered to deploy before their C.O. paperwork went through. Just last week, 19-year-old conscientious objector Tony Anderson at Fort Carson, Colo., publicly shared his experience. Anderson had been discouraged by his commanding officers from applying for C.O. status, and he disobeyed orders to deploy to Iraq. He now faces steep punishment at the hands of the military.

Ivey, who grew up in Augusta, Ga., just a few miles from the Fort Gordon base where he is now stationed, joined the Army willingly. After the events of Sept. 11, 2001, he felt that it was “his generation’s time to stand up in defense of the country.” He states, “I went to the recruiter myself. No one approached me.” So, in 2005 he joined the service out of high school, despite his mother’s pleas that he take more time to think it over.

Yet once Ivey was in the military, his feelings about war changed. He found it unsettling to chant “Blood, blood, blood makes the grass grow” in basic training, and he wrote a letter home to his mother describing his discomfort. When he was deployed to Korea in 2006, he started questioning the value of military service. Halfway through his yearlong deployment, he began studying anarchist philosophers and nonviolent thinkers such as Martin Luther King Jr. and Mahatma Gandhi.

The refusal of close friend Ryan Jackson to deploy to Iraq led Ivey to re-evaluate his own situation. They got to know each other in Advanced Individual Training in 2005 and were in the same unit together in Fort Gordon after Ivey’s return from Korea. They discussed at length their reluctance to go to war. Ivey provided simple advice to Jackson: “I told him, you’ve got to do what you believe in.” So, Jackson decided not to go. He attempted to gain administrative leave, but when his paperwork failed to go through, he decided to go AWOL rather than face deployment. Ivey remained close with Jackson throughout the process, giving him emotional support when he went AWOL in 2007 and was court-martialed and sentenced to 100 days of confinement. “When I talked to Jackson before he went to court-martial, that’s when I decided I was going to start on my conscientious objector paperwork,” says Ivey.

Meanwhile, Ivey continued to research alternatives to war, immersing himself in the texts of nonviolent philosophers. He also got involved in his local community, helping start a chapter of Food Not Bombs, a collective movement to serve free food, mostly vegan and vegetarian, to others. “I want to make a difference in people’s lives,” he says.

While his conscientious objector paperwork was being processed, Ivey was ordered to deploy to Afghanistan. Application for C.O. status cannot forestall deployment, but applicants are supposed to be assigned tasks that do not conflict with their C.O. convictions. However, this military directive is subject to ambiguous interpretation, and the commanding officer has considerable discretion in determining appropriate assignments. Furthermore, many conscientious objectors consider deployment to a combat zone by definition ethically compromising.

If Ivey refuses to deploy, he could be charged with “Missing Movement” — Article 87 of the Uniform Code of Military Justice — by a general court martial, punishable by up to two years in the stockade, loss of pay and a dishonorable discharge. There is also the danger that the military might try to pile on charges against him, such as Article 90, “willfully disobeying superior officer,” and General Article 134, which covers all conduct “unbecoming” a service member.

Ivey is determined not to go to Afghanistan, and he is working with a civilian lawyer to explore his options. He has also enlisted the support of Courage to Resist, an organization that supports the troops who refuse to fight in Iraq and Afghanistan and has worked with several GIs in similar situations, including Anderson and Jackson.

Ivey’s mother, who lives in Augusta a few miles from where Ivey is stationed, is supportive but worried about her son. “I am concerned because any time someone you care about is in a situation that could cause them turmoil in their life or legal charges, whether they are right or wrong, I am going to worry,” she says. “But I would in no way encourage him to do anything different. He is following his moral beliefs, and he has to do that.”

Despite the threat of steep punishment, Ivey remains steadfast in his commitment to nonviolence. “I am against organized war,” he says. “It is flat-out murder.”