In memory of Joshua Casteel 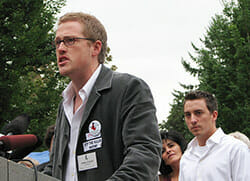 An Arabic translator, Joshua Casteel deployed to Iraq with the 202nd Military Intelligence Battalion in 2004. He served as an prisoner interrogator at the now-infamous Abu Ghraib prison from June 2004 to January 2005. During his deployment, Joshua told his command about his intention to apply for a conscientious objector discharge. His command at Abu Ghraib assigned him to the “non-combat” role of working at the massive and toxic burn pit. Into this burn pit went plastic, rubber, body parts and other medical waste, and all manner of other garbage. It burned 24/7. After his return stateside, Joshua was eventually honorably discharged as a conscientious objector in May 2005. Joshua was diagnosed less than a year ago with stage IV lung cancer. This cancer was already present in his liver, spine and adrenals. He died in New York City a few days ago on August 25, 2012. He was 32 years old. Joshua believed that the cancer was a direct result of his burn pit duty, yet he explained, “I have a certain sense of relief that I get to share in the sufferings of the Iraqis. We were conducting those burn pits in agricultural fields…. Americans are gaining awareness of the impacts of burn pits on soldiers, but not the impact they will have on Iraqi civilians.” Joshua’s courage to resist was unsurpassed.

Read more about Joshua at IVAW.org