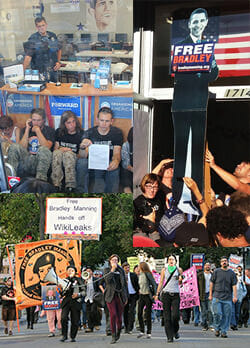 Six veterans and activists in Oakland, and six more in Portland, were arrested yesterday night at Obama 2012 campaign offices for occupying the spaces in solidarity with accused WikiLeaks whistle-blower PFC Bradley Manning. Dozens of veterans and anti-war demonstrators coordinated a West Coast set of actions that also included protests in Los Angeles, Las Vegas, and Seattle.

Among the approximately 100 Oakland protesters was Iraq War veteran Scott Olsen, who participated in the sit-in and explained, “We occupied the President’s campaign office to raise awareness about the injustices Bradley Manning has endured. Bradley has sacrificed for us, doing what was right despite potentially spending the rest of his life in jail.”

Protesters delivered a letter to campaign staff members, which they requested be sent to President Obama at the main campaign headquarters in Chicago. The letter makes its demands clear: that President Obama pardon PFC Bradley Manning, accounting for both his abusive treatment in a Quantico prison cell and the president’s own unlawfully prejudicial remarks that Bradley “broke the law.”