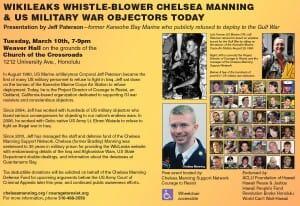 Tuesday, March 10, 7-9pm, at Weaver Hall on the grounds of the Church of the Crossroads. 1212 University Ave., Honolulu

In August 1990, US Marine artilleryman Corporal Jeff Paterson became the first of many US military personnel to refuse to fight in Iraq. Jeff sat down on the tarmac of the Kaneohe Marine Corps Air Station to refuse deployment. Today, he is the Project Director of Courage to Resist, an Oakland, California-based organization dedicated to supporting GI war resisters and conscientious objectors.

Since 2004, Jeff has worked with hundreds of US military objectors who faced serious consequences for objecting to our nation’s endless wars. In 2006, he worked with Oahu native US Army Lt. Ehren Watada to refuse to fight an illegal war in Iraq.

Since 2010, Jeff has managed the staff and defense fund of the Chelsea Manning Support Network. Chelsea (former Bradley) Manning was sentenced to 35 years in military prison for providing the WikiLeaks website with embarrassing details of the Iraq and Afghanistan Wars, US State Department double-dealings, and information about the detainees at Guantanamo Bay.

Tax deductible donations will be solicited on behalf of the Chelsea Manning Defense Fund for upcoming arguments before the US Army Court of Criminal Appeals later this year, and continued public awareness efforts.

Note: US Marine officer 1st Lt. Jacob Bridge will NOT be representing the US military at this event, in any way. His participation is limited to sharing his personal views on these matters with the local community.