Troops told to give back thousands in war surge bonuses 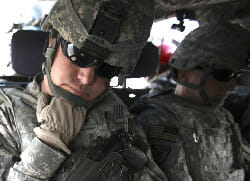 In most cases, when an employer pays a signing bonus to attract new workers, that payment is understood to be essentially unrecoverable. But the Pentagon has a different understanding — and it’s ordering the California National Guard to claw back thousands of dollars paid to soldiers who re-enlisted to fight in Iraq and Afghanistan.

And in many cases, an employer would also have a tough time arguing that decade-old lapses in its own oversight should trigger wage garnishments and tax liens against its workers. But again, this is the U.S. military … That’s the gist of a report by the Los Angeles Times, which says nearly 10,000 soldiers are now scrambling to pay back signing bonuses [and student loan repayments] that helped the Pentagon cope with the task of using an all-volunteer service to fight two prolonged international conflicts. Read more at the LA Times