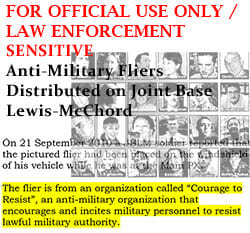 This law enforcement bulletin was recently released in response to a Freedom of Information Action (FOIA) request. Most interesting to us is the citation of federal law (18 U.S.C. 2388) in an effort to paint our work as lawless.

FOR OFFICIAL USE ONLY / LAW ENFORCEMENT SENSITIVE: Anti-Military Fliers Distributed on Joint Base Lewis-McChord

The flier is from an organization called “Courage to Resist”, an anti-military organization that encourages and incites military personal to resist lawful military authority.