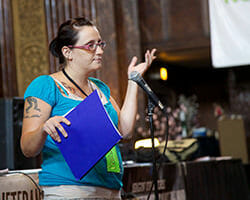 Sara Beining will have a plea & sentencing hearing on December 9th at 9 a.m. MST at Fort Carson, Colorado. A sealed plea deal is in place, so Sara will be appearing in court to plead guilty to charges of desertion and then to make her argument in front of the judge to request a lower sentence than what was provided in the plea agreement.

Supporters and friends are welcome to attend the hearing. It will take place at the Fort Carson courthouse. You are encouraged to arrive early as you will need to go through the security checkpoint at the main gate. Be sure and bring photo ID (as well as car registration and insurance if driving your own vehicle). We expect the hearing to last all morning and part of the afternoon.

Sara appreciates all of the support she has received, including the letters and books folks have sent her. It has been hard being separated from her daughter, but she is otherwise doing fine and in good spirits.

Lastly, if you know Sara personally and want to write a letter on her behalf asking for a lower sentence, please send your letters to me at: