Dialogues Against Militarism report from Israel/Palestine 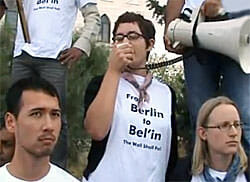 Update from Sarah Lazare, Courage to Resist Project Coordinator, and Iraq War resister Stephen Funk who are traveling throughout Israel/Palestine with the Dialogues Against Militarism project.

About 25 of us trudged towards military prison 400, just outside of Tel Aviv, coils of razor wire and lookout towers looming above us, fields of mud and dry grass to our right. As we walked past, soldiers in the towers yelled out to us in Hebrew: “We are prisoners, too” and “We don’t like the cops either!” referring to the two police vehicles trailing us. When we reached our destination – an opening in the field, nestled between the fences marking the perimeter of the prison – we began setting up the sound system and preparing for the day’s goal of reaching earshot of Or Ben-David, a young Israeli being held in prison for refusing the army draft.

Our gathering consisted predominantly of young Israelis who had themselves been conscientious objectors, some of whom had been held in that same prison quite recently, some of whom had just refused and were scheduled to report to prison in a few months. The crowd also included some older radicals, a smattering of internationals, and of course us – U.S. War resisters, Iraq Veterans Against the War, and anti-militarist organizers, here to lend our support to Israeli and Palestinian movements against occupation.

Raz Bar-David, a military resister who had spent time behind those bars, explained that we were at the point where we could best be heard by Or. And it is a good thing she could, because the sounds being emitted over this barren military landscape were worth hearing.

Solar powered speakers attached to a bicycle blasted reggae and punk songs as people sang along over a hand-held microphone. The music stopped at several points so that people could chant in unison, “Don’t worry, the occupation will one day end.” And a special ritual of support, crystallized in the most recent generation of refusers involving changing the lyrics to popular Disney songs to infuse them with political meaning, turning the Pocahontas theme song into a ballad of struggle. Later, we found out that Or called her brother from within military prison to let him know that she was thrilled to hear her friends and supporters singing. 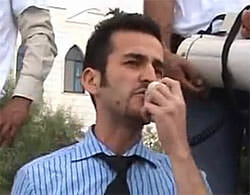 Israeli youth find themselves situated in the middle of one of the world’s most contested occupations. With mandatory conscription for all graduating high school seniors, their bodies are used to enforce Israeli occupation and war: 18 and 19 year-olds become the arms of an apartheid state. In the United States, young people, often from low income or marginalized communities, are sent off to die in the deserts of Iraq and Afghanistan, with sharper distinctions maintained between military and civilian life. Here, the war is in your face, with every city, town, bus station, and beach crawling with teenagers with machine guns slung over their shoulders.

Our hosts explained that the darker skinned Israeli soldiers are given the most undesirable jobs, being used as border police, and known for routinely beating and injuring Palestinians. As in the U.S., sexual assault in the military runs rampant, and suicide is a major killer, as those who traumatize others are themselves traumatized in the process.

The occupation here is present everywhere, from the all-white neighborhoods where residents never have to see a Palestinian, to the Dheisheh Refugee Camp, where the wall in the distance marks the boundary between those lives deemed valuable and others deemed dispensable by the Israeli state. As we move through this painful terrain, we are getting a better sense of just how high the stakes are for those resisting occupation from within Israel, as well as those fighting for their homes, their lands, and their lives.

An increasing amount of Israeli youth are refusing to lend their bodies to Israeli policies of occupation. In August of last year, 100 Israeli high school students signed an open letter to the government of Israel stating they would not enter into the mandatory two years of service in the Israeli Defense Forces (IDF) upon graduation and instead risk imprisonment. Another group of high school students made a similar refusal this August, citing their refusal to participate in the Israeli occupation. An increasing number of soldiers are speaking out about the atrocities they witness in combat, with several coming forward during the recent attacks in Gaza to testify about war crimes, through organizations like Breaking the Silence. An untold number of Israelis quietly refuse with 56% percent avoiding military service for different reasons. Many conscientious objectors are being released on “mental health” grounds (Profile 21) so that the Army does not have to publicly acknowledge ethical objection.

We have come representing the growing ranks of U.S. soldiers refusing orders or deployment. Army soldiers are refusing to serve at the highest rate since 1980 with an 80% increase in desertions (defined as absence for more than 30 days) since the invasion of Iraq in 2003, according to the Associated Press. Over 150 G.I.s have publicly refused service, facing the threat of court-martial, severe prison terms, and dishonorable discharge rather than fighting in Iraq or Afghanistan. An estimated 250 Iraq war resisters are residing in Canada, one of whom was deported and court-martialed last month. A 2006 Zogby poll, the most recent poll of its kind, found that 72% of all U.S. troops serving in Iraq wanted the U.S. to exit within the next year. While there have been no polls since then, evidence suggests that such sentiments continue.

During our time in Tel Aviv, we have learned much about Israeli war resistance movements and how they are situated in the broader movement against occupation. Local activists tell us about dialogues amongst the Shministim emphasizing the importance of following Palestinian leadership when fighting the occupation. Refusers have talked to us about being isolated from their families and peers, in a society where military refusal is often treated like high treason. Former soldiers talk about their experiences carrying out acts of brutality and occupation, and the work they do now to fight for justice.

Just as in the U.S., Israelis understand the importance of showing solidarity for those making difficult choices and facing harsh consequences. The solidarity action had a heavy emotional caliber, despite the fun and dancing, as many of the demonstrators have been recently released from prison or are slated for detention in the coming months. We have witnessed a strong collective sensibility amongst the Shministim, who write letters of unity and refusal with each other and turn out en masse for each others’ jail support actions or off-to-prison parties. I think that GI resistance support movements in the U.S. have much to learn from this collective approach. – Sarah

At the military prison solidarity action, Stephen Funk, Iraq War resister who spent time in prison for his refusal to serve, was struck by the similarities between U.S. and Israeli resister solidarity, and remembered how important it was to him to have support. Here are his reflections:

When I was imprisoned for refusing to participate in the war in Iraq, I nearly had my ‘good time’ taken away because a protest was being convened outside the base in my honor. The “Free Funk” protest was the first time during the war that a rally had been organized outside a military base in support of a war resister. I was shackled, handcuffed, and brought before the commanding officer of the brig who threatened to extend my time in prison unless I called off the protest. They also told me they would not let my mom visit because she was coming down in a caravan of activists who were coming from New York City and Washington D.C. and would therefore be likely to cause trouble. This macho Marine with a strict high-and-tight was afraid of my little 5′1” Asian mother. I didn’t play along with his game. I told him that I couldn’t call off a protest that I didn’t even organize, that they couldn’t take away my good time and that I would tell the media if they tried. I also asserted that my mom posed no threat and that she couldn’t be prevented from visiting me.

The day of the protest I beamed from ear to ear the entire day. Knowing that people were just on the other side of a wall supporting my freedom and the conscientious choices which landed me in prison gave me moral support to make my time more bearable. Other prisoners found out about it which made them curious about me and helped me make more friends. More importantly, the Free Funk protest signaled to future war resisters that they would receive support by the antiwar community. It was nice to see my mom as well.

Today was incredible. Having the chance to return the support from the other side of the wall for an Israeli resister reminded me of how much it meant to me and why this type of support is crucial to ending war. DAM is about building international solidarity in the demilitarization of the world. -Stephen