“I currently don’t have a family care plan, but they told me they did not care and for me to get ready to go to Afghanistan,” explained Oakland, California native Spc. Alexis Hutchinson, a 21-year-old soldier based at Hunter Army Airfield outside of Savannah, Georgia.

As I spoke to Alexis on the phone, I believed if I found her a civilian lawyer to work with the military, a reasonable resolution would be quickly found. Unlike most service members Courage to Resist assists, Alexis was not refusing to deploy. She was not looking to speak out against war. She was simply asking for more time to find someone to care for her 11-month old son Kamani. Within a few days, however, the Army had tossed Alexis in the stockade and turned Kamani over to the Chatham County (Georgia) foster care system.

In response to a public outcry, growing media attention, and congressional inquiries, the Army backed off of their pledge to deploy Alexis last night, November 15. Alexis’ lawyer Rai Sue Sussman of San Francisco notes that “The Army maintains that she may still be sent to Afghanistan for a court martial.” That has left Ms. Sussman contemplating travel to Afghanistan to represent her client.

Alexis’ mother Angelique Hughes traveled to Savannah, Georgia to retrieve Kamani from foster care. However, Angelique has a special-needs daughter herself, and she also cares for her ailing mother, and her ailing sister. “This is an infant, and they require 24-hour care,” Angelique told the Associated Press. “It’s very, very stressful, just too much for me to deal with.” 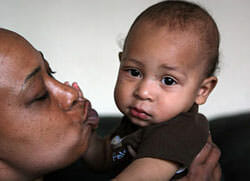 That is the reason why Angelique contacted her daughter’s commanders last month to tell them that she could not be the long-term care provider for the infant as originally planned. She explained that they needed more time to find another family member or close friend to care for the boy while his mother is deployed to Afghanistan for a year. They initially received an extension, but that was revoked a couple of weeks later. Major Gallagher, of Alexis’ unit, later told Ms. Sussman that he did not believe this was a real family crisis, and that Alexis’ “mother should have been able to take care of the baby”.

AWOL for an evening, one year in jail?

Even after lawyer Rai Sue Sussman contacted the Army, Alexis’ command ordered her to deploy the evening of November 5. Believing she was out of options, Alexis went AWOL that evening and returned to base the following day. It was then that she was jailed for three days and her son placed into foster care.

The Army initially made it clear that they intended to put Alexis on trial by courts martial in Afghanistan for AWOL, and possibly “Missing Movement”. A Special Courts Martial would carry a maximum sentence of one year in prison and a Bad Conduct Discharge.

“To me it sounds completely bogus,” Ms. Sussman told Dahr Jamail and IPS a few days ago, “I think what they are actually going to do is have her spend her year deployment in Afghanistan, then court martial her back here upon her return. This would do irreparable harm to her child. I think they are doing this to punish her, because they think she is lying.” 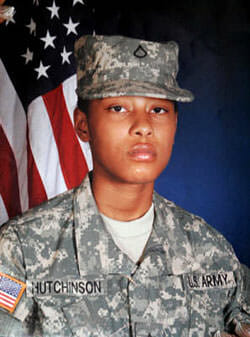 Alexis joined the Army in 2007. She is currently a cook (92G-Food Service Specialist) with the 3rd Combat Aviation Brigade of the Army’s 3rd Infantry Division stationed near Ft. Stewart, Georgia.

A few conservative websites have taken notice of growing public outrage over this case. Some have attacked Alexis because she is young black woman who got pregnant soon after basic training, yet she choose to remain the Army! Another blames her because Kamani’s father is not a part of their lives. Some incredulously ask if we would support a young male soldier in a similar situation (yes—we would). Alexis’ only real mistake was believing the military’s “family friendly” recruiting sales pitch.

Offers to care for infant

Since Courage to Resist helped break news of this outrage–which has now been covered by NPR, AP, USA Today, and The NY Times—two dozen very generous and caring individuals and couples from across the country have come forward with offers to care for Kamani. Alexis and her family want to share their gratitude for this generosity.

Without time to even evaluate these offers, however, this situation is too similar to that of Kamani being placed back into a county foster care system—which of course also has some amazing caregivers. If Alexis is deployed, it’s understandable that the family will try very hard to find a way to keep Kamani near them in the San Francisco Bay Area.

While Kamani was in county foster care in Georgia, he was fed a dairy product that the 11-month old had an allergic reaction to. He has been “very clingy” since explains his grandmother. The family hopes that Alexis and Kamani can be reunited as soon as possible.

How to support Alexis and her family

Please call your congress members and senators—especially if they are on the Committee on Armed Services—to request that they take action on behalf of parents in the military. What is happening to Alexis and Kamani Hutchinson should not be allowed to happen again. 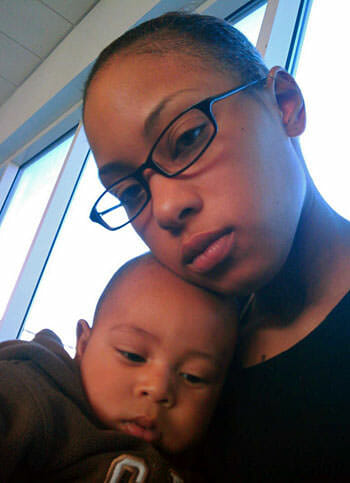 Alexis Hutchinson with Kamani, self portrait

Courage to Resist hopes to fund Alexis’ civilian legal defense expenses, and help with her family’s travel expenses related to resolving this situation. As to why Courage to Resist, an organization dedicated to “supporting the troops who refuse to fight” is taking up the defense of a young mother who is not actually refusing to fight, organizer David Solnit recently explained:

“I co-founded Courage to Resist… because we believed that in order to achieve deep change in our country, our movements had to make common cause with the 2.5 million service members—and their family members—who are getting a raw deal.”

Alexis and her family are getting that raw deal.