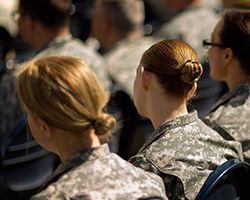 Lawmakers have officially dropped plans to make women register for the draft, instead opting for a review of the ongoing need for the Selective Service System.

But conservatives in both chambers objected to the provision and stripped it out of the final legislative draft unveiled Tuesday.

Under current law, men ages 18 to 26 are required to register for possible involuntary military service with the Selective Service System. Women have been exempt, and past legal challenges have pointed to combat restrictions placed on their military service as a reason for their exclusion.

Early this year, Defense Secretary Ash Carter removed those restrictions, opening combat posts to women for the first time. In response, a collection of military leaders and women’s rights advocates said they would support requiring women to now register for the draft.

Instead, the final authorization bill draft — expected to be voted on by Congress in the next few days — calls for a review of the entire Selective Service System, to see if the idea of a military draft is still realistic and cost-effective.

The system has an annual budget of about $23 million, but watchdog groups have questioned whether the system could assemble a list of draftees if a national emergency were to arise.

And military leaders have repeatedly insisted they have no desire to return to the draft to fill the ranks. No Americans have been pressed into involuntary military service since the last draft ended in 1973.

Though Democrats are likely to renew debate on the issue next year, it’s unlikely to progress far with Republicans set to control both chambers of Congress and the White House.