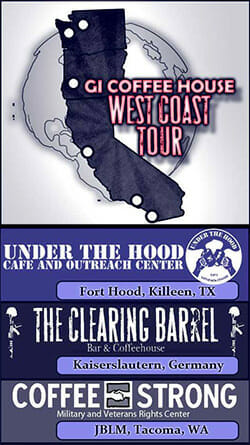 Local communities will welcome the GI Coffeehouse Tour with special events featuring poets, artists and musicians. Participants at tour stops will learn about GI coffeehouse history, find out what current-day coffeehouses do to support the troops, and join in conversations about the current state of the military and what that means for service members and their families.

The GI  Coffeehouse Tour will feature the work of Under The Hood Cafe and Outreach Center near Fort Hood in Killeen, Texas, Coffee Strong near Joint Base Lewis-McChord in Lakewood, Washington, and The Clearing Barrel GI Bar and Coffeehouse in Kaiserslautern, Germany, the center for U.S. military installations in Europe.

The tour will raise much needed funds for the three GI outreach centers, which provide counseling on military discharges, veterans benefits and conscientious objection to war, as well as safe spaces for soldiers to share their experiences and begin healing the psychological wounds of war.

Iraq veteran and artist Malachi Muncy will represent Under The Hood Cafe & Outreach Center, along with Ryan Holleran, recently discharged from the Army at Ft. Hood.  Coffee Strong will be represented by its coordinator, Alex Bacon, a Coast Guard veteran.

The Clearing Barrel GI Bar and Coffeehouse will be represented by German peace activist Meike Capps-Schubert, who is flying to California from Germany.  Since 2003, Capps-Schubert has worked for the Military Counseling Network – the overseas branch of the GI Right Hotline.

“This unique tour reminds us of the key role GI’s have played in ending wars,” said Iraq veteran Malachi Muncy.  “It is critically important to address the complex needs of today’s veterans, active duty GI’s, and family members, who have suffered much from multiple deployments to the U.S. occupations of Iraq and Afghanistan.”

For a complete tour schedule, speaker bios and photos, along with information on the three GI coffeehouses, go to the website of the GI Coffeehouse Tour.