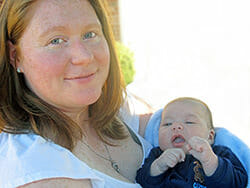 It was her maternal instincts that first landed Kimberly Rivera at odds with her role serving in Iraq. Six years later, the army used her most basic human right as an expecting mother to make an example of other soldiers who might fall out of line.

After returning to the United States after five years in Canadian exile with her family (husband Mario and four children), Kimberly, then pregnant with their fifth, was arrested and sentenced to 10 months in brig. Despite public pressure for leniency and Amnesty International recognizing her as a prisoner of conscience, Kimberly was denied even a meager 45-day early release to give birth and bond with her new son outside of prison.

Forced to give birth in military custody under a chain of command seemingly unable or unwilling to coordinate procedures, Kimberly and her family were subjected to various indignities, ranging from subtle frustrations and discomfort to poor treatment putting both mother and child at risk. As a final insult, Mario was prevented from witnessing his son’s actual birth, while Kimberly was separated from her newborn shortly after giving birth.

“I could have been in worse prison facilities, but they didn’t follow their own rules at the Miramar brig,” says Kimberly. “There was no way I could follow everyone’s different and conflicting rules. There was always drama in that regard.”

First, Kimberly was forced to take a flu shot that she didn’t want while pregnant. Although she initially tried to refuse the injection, then requested it be delayed until after she gave birth, she gave in when threatened with segregation and a longer sentence.

“My CO, unfortunately, didn’t like getting complaints and listening to prisoners,” says Kimberly. “He stated many times that he would listen to his guards over any prisoner. There were many guard and prisoner sexual assault problems in that brig that are being investigated.  They were under investigation and had been under investigation for most of the time I was there.”

Despite the brig’s menacing reputation, Kimberly says her main problem was with how inconsistent her jailers were in following their own SOPs (Standard Operating Procedures) around pregnancies.

By the time Rivera finally got to see these SOPs—kept secure behind a supervisor’s desk—she was already five months pregnant and still being forced to do strenuous physical work in sweltering summer heat without rest periods.

“It was extremely hot and sometimes the air conditioner went out for two weeks at a time,” she says. “It did that four or five times. They had me doing difficult chores that got me overheated and were against my medical restrictions—they ignored them. They had me cleaning the dorm area and facilities every day. We had to mop, vacuum, dust, wipe down windows, clean showers.  We used cleaning supplies and detergent. I was cleaning every day through my pregnancy, usually for two to three hours a day. Once a week, there was a ‘happy hour’ time when we had to clean what we already cleaned so the command could watch us do it.”

Later in her pregnancy, Kimberly challenged her jailers for violating their own SOPs, refusing her the option of lying down, eating more healthful foods, occasionally removing her heavy outer uniform and avoiding work that would make her nauseated or dizzy.

“In the last month of my pregnancy, they finally put a restriction on my medical order that allowed me to lay down two hours a day. I wrote a big long complaint to the C.O. and the commander came to see me. He was ready for a fight.”

Kimberly’s commander told her he had the power to pick and choose which pregnancy SOPs to follow because she was not having any serious complications. When Kimberly countered that those SOPs were in place to avoid a complicated pregnancy, the commander said he would talk to the medical department, but nothing improved.

The Riveras’ ordeal only tightened when Kimberly went into labor. A female staff sergeant insisted she remain in the room to supervise her prisoner during the birth, despite Kimberly’s requests for privacy.

“She had three meals brought to her and ate in my room,” recalls Kimberly. “It was very disrespectful and unprofessional. If you are undergoing any treatment, other people do not need to be there.”

The sergeant’s presence—and refusal to let Kimberly close her bed curtain—made it difficult for Kimberly to push for her husband to be allowed to be present for the birth, as per the approval of the commander.

“They wouldn’t let me in the room to see Kim or the baby,” says Mario. “I heard the Staff Sgt. talking to one of the lieutenants and some hospital staff about making me leave the premises and trying to figure out how to give Kim more of a hard time.”

While the staff sergeant and a male lieutenant discussed how to proceed, debating putting a second female soldier in the delivery room for security, Mario attempted to appeal directly to the lieutenant.

“I said I didn’t think it was fair that they were making me miss my wife’s birth and the first few minutes of my son’s life,” Mario recalls bluntly.

While Mario argued over approval that had already been granted, things in the delivery room were unraveling. After a particularly strong contraction, between five and 10 nurses rushed into the room and adjusted Kimberly into various positions.

Then came the news:  The baby’s heartbeat was registering as undetected.

It was every mother’s worst nightmare … and any medical professional’s worst mistake.

Kimberly pointed out that the monitor may have been disconnected in the crowd of nurses’ flurry to rearrange her position. It had, indeed. The baby’s heartbeat remained steady, after all.

When Mario was finally allowed in to see Kimberly, she was deeply concerned about the disorganization and negligence at play at such a crucial point in her labor. Mario was told he would need to vacate the delivery room after a brief visit, regardless of where his wife was in her delivery.

“I told him what was going on and that they were not following my plan or the SOPs they were supposed to follow after we’d gotten it all approved,” says Kimberly. “He tried to calm me down and said he’d get back into the room as soon as he could. He did everything he could to get back—talking to people and having emails and phone calls and faxes sent [to the military and local congressperson].”

Kimberly had been taken to the medical facility around 10 am. Shortly before 4:00 in the afternoon, nurses ushered out a sergeant and staff sergeant, and Kimberly gave birth to Matthew Rivera, in the company of three nurses—and no doctor.

Mario missed his son’s birth thanks to an additional delay where he was forced to return to a security check-point to surrender his cell phone.

“When I got back upstairs, Kim had already had the baby and I missed cutting his [umbilical] cord,” says Mario. “I got there just as they had cut his cord and put him into the little makeshift crib to clean him off.”

“Mario came back in and Matthew was already in my arms,” says Kimberly. “He missed it by about a minute.”

After the birth, the nurses confided to Mario that the admiral had approved his being present in the delivery room, 24-7 as needed, like any other expecting dad.

There were still trials to come. Mario encountered more confusion around approvals and SOPs when he returned with their children so they could meet their new baby brother.

Although they were allowed in after some two hours of runaround, photographs and cell-phone calls were strictly off-limits. The first photograph of baby Matthew would have to use a security waiting room as a back-drop.

Meanwhile, although Kimberly was technically permitted to pass her breast-milk on to her son—in Mario’s custody—the military refused to allow her to store it or refrigerate it until Mario arrived to pick it up. Although this may rank lower than some of the other indignities the couple was forced to endure, this mean-spirited decision translates to a costly one for the Riveras, who face difficult economic challenges with Kimberly in prison and Mario, who struggles with health issues while raising four young children. 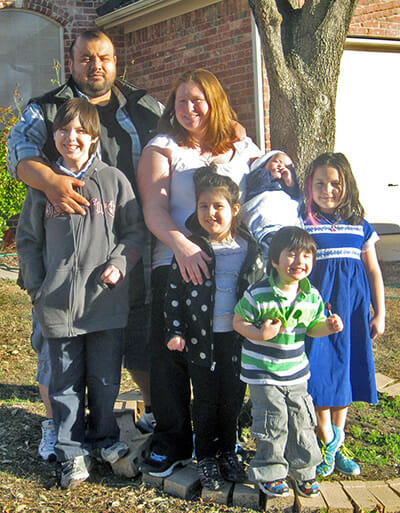 “They use any S.O.P. to justify what they do—but not for the benefit of the prisoners,” says Kim, who was sent back to full cleaning duties days after giving birth. “They change it up and use different rules from different branches of service.  It’s like having five daddies and they all tell you to do different things every day.  Even if I had a job in the service, I would have had maternity leave for three months and time with my children. They took away my ability to lie down for two hours a day, a week after I gave birth. That was mean.”

Ironically, after denying a slightly early release in order to bond with her newborn, Kimberly was freed due to good behavior and extra work duties only 18 days after giving birth. Her extra work? Crocheting blankets for wounded veterans.

Kimberly and Mario Rivera and their children are currently experiencing hard times economically. Mario is seeking employment despite his chronic health problems. They are in need of housing as they must soon vacate their temporary abode in Texas.

“If it was up to my mom, we could stay, but she is disabled and relies on my brothers and there is nothing she can do,” says Mario. “We’re looking for a place to live. But we have no money to rent a place and I am looking for work.  We have nothing to our names but the clothes on our backs. “

Donations for the Rivera family can be received at:
https://co.clickandpledge.com/sp/d1/default.aspx?wid=58528
The Rivera Family Support Fund is hosted by Courage to Resist. Donations are tax-deductible.