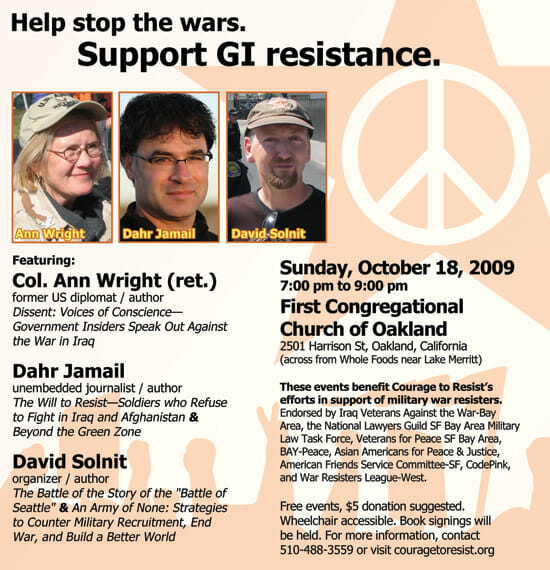 Sunday, October 18 from 7:00 pm to 9:00 pm at the First Congregational Church, 2501 Harrison St, Oakland, California (across from the new Whole Foods near Lake Merritt).

Ann Wright spent 13 years on active duty in the US Army and the next 16 years as a foreign diplomat in countries such as Nicaragua, Somalia, Uzbekistan, and Sierra Leone. She was on the team that reopened the US Embassy in Kabul, Afghanistan in December, 2001. On the eve of the US invasion of Iraq, she resigned in protest, declaring, “I have served my country for almost thirty years in some of the most isolated and dangerous parts of the world. I want to continue to serve America. However, I do not believe in the policies of this Administration and cannot—morally and professionally—defend or implement them.” She is the author of “Dissent: Voices of Conscience—Government Insiders Speak Out Against the War in Iraq”.

Dahr Jamail is an award-winning independent and unembedded journalist. He has spent a total of nine months in occupied Iraq as one of only a few independent US journalists in the country and has also reported from Syria, Lebanon and Jordan. He is the author of “Beyond the Green Zone” and has now just released his new book “The Will to Resist—Soldiers who Refuse to Fight in Iraq and Afghanistan”.

David Solnit is an anti-war, global justice, and arts organizer. He was a key organizer in the WTO shutdown in Seattle in 1999 and in the shutdown of San Francisco the day after Iraq was invaded in 2003. He is the co-editor of the forthcoming book “The Battle of the Story of the “Battle of Seattle”” and co-author with Aimee Allison of “Army of None: Strategies to Counter Military Recruitment, End War and Build a Better World.”