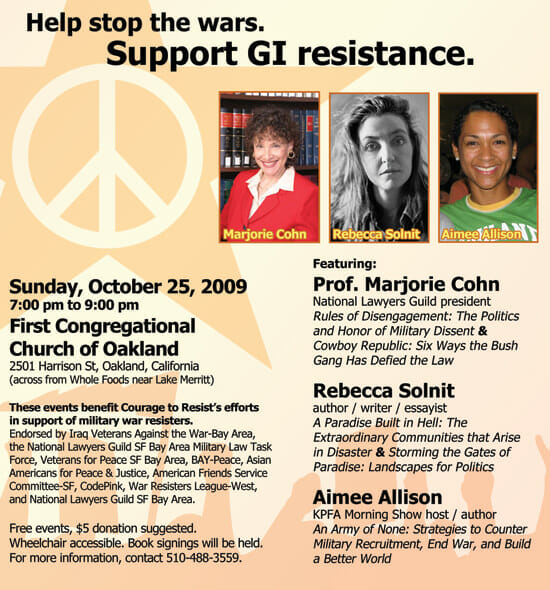 Sunday, October 25 from 7:00 pm to 9:00 pm at the First Congregational Church, 2501 Harrison St, Oakland, California (across from the new Whole Foods near Lake Merritt)

Marjorie Cohn is president of the National Lawyers Guild and a professor at Thomas Jefferson School of Law, where she teaches criminal law and procedure, evidence, and international human rights law. She is author of "Cowboy Republic: Six Ways the Bush Gang Has Defied the Law" that "makes the case for prosecuting Bush officials with exquisite legal detail in straightforward, everyman language" (William Fisher review). Along with Kathleen Gilberd, Prof. Cohn has just published "Rules of Disengagement: The Politics and Honor of Military Dissent" which "takes the side of US service members who didn’t check their conscience—and their sense of honor—at the door when they signed up" (Truthout review).

Rebecca Solnit is an award winning author/writer/essayist. Her new on disaster and civil society "A Paradise Built in Hell: The Extraordinary Communities that Arise in Disaster" is now available. Ms. Solnit has won an NEA Fellowship for Literature, the 2004 Wired Rave Award for writing, and a Guggenheim Fellowship.

Aimee Allison is an is an author, public affairs TV host, and counter-recruitment leader. Since 2007, she has been a co-host of The Morning Show on Pacifica station KPFA. Aimee, an Army medic at the time, was discharged as a Conscientious Objector during the 1991 Persian Gulf War.