When refusing to kill has a higher sentence than murder 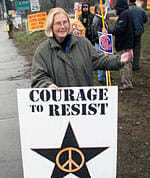 From the beginning of the wars in Afghanistan and Iraq, the United States military has come under intense criticism and scrutiny for the deaths of civilians. This week, the secretary of defense and the chairman of the Joint Chiefs of Staff made trips to Afghanistan and Pakistan to "acknowledge" the deaths of innocent civilians in attacks in those countries.

The deaths of most civilians are counted in the "costs of war." A few dozen military have been court-martialed on allegations of mistreatment, manslaughter and murder of Iraqi civilians. With a very few exceptions, most who were court-martialed have been acquitted. Those who were convicted have generally served light sentences.

This week we see again that punishment is less for murdering four Iraqis than for refusing to participate in a war that many citizens, and many in the military, see as a crime against the peace – a war crime.

On September 18, 2008, the US Army sentenced Specialist Belmor Ramos to seven months in prison, demotion to private and a dishonorable discharge for standing guard from a turret in a Humvee while three others in his unit, the First Infantry Division, bound, blindfolded, shot in the heads and dumped the bodies of four unidentified Iraqi men into a Baghdad canal in 2007 in retaliation for deaths in Ramos’s unit. According to Associated Press reports, during the court-martial, Ramos admitted his guilt: "I wanted them dead. I had no legal justification or excuse to do this."

Ramos had been charged with conspiracy to commit murder, for which he could have received a life sentence. The military judge in Ramos’s court-martial in Vilsek, Germany, would have sentenced him to 40 years in prison had the military prosecutor not agreed to a plea bargain for seven months to testify in the upcoming court-martials of the three non-commissioned officers – Sgt. John E. Hatley, Sgt. 1st Class Joseph P. Mayo and Sgt. Michael P. Leahy Jr. – who were charged on September 16, 2008, with premeditated murder, conspiracy to commit premeditated murder and obstruction of justice.

Longer sentences for resisting war than for murdering civilians

Just one month ago, US Army Private Robin Long was sentenced to fifteen months in prison, reduced to private and given a dishonorable discharge for having been absent without leave from the Army rather than serving in a war he believed was unlawful. He had been deported from Canada where he had been speaking on his concerns about the legality of the war for three years and was handed over by Canadian immigration officials to the US military for prosecution. One month earlier, US Army Private First Class James Burmeister voluntarily returned from Canada and was sentenced in July 2008 to six months in prison for refusing to return to Iraq after two previous tours in which he was hit by three IEDs. In May 2008, Private First Class Robert Weiss was court-martialed in Vilseck, Germany, and sentenced to 7 months in jail for refusing to go to Iraq. Also in May 2008, Private First Class Ryan Jackson was also court-martialed and sentenced to 100 days in jail for refusing to go to Iraq.

In 2007, the court-martial of US Army First Lieutenant Ehren Watada, the first commissioned officer who refused to deploy to Iraq, ended in a mistrial. He is still on active duty with the Army. Also in 2007, US Army Sergeant Mark Wilkerson refused to return to Iraq and was sentenced to seven months in jail. The Army denied the conscientious objection application of US Army medic Specialist Agustin Aguayo; he refused to return to Iraq and was sentenced to eight months in jail. Also in 2007, Specialist Melanie McPherson, a US Army Minnesota Reservist, refused to go to Iraq in a job she was not trained for; she was court-martialed and sentenced to three months in jail.

In 2003, the US Marines denied the conscientious objection application of Marine Reservist Stephen Funk and sentenced him to six months in jail. All of the war resisters who have been court-martialed for refusing to go to Iraq or Afghanistan have been given either dishonorable or bad conduct discharges.

Thousands of other military service members who privately and silently oppose the wars in Iraq and Afghanistan have been given administrative discharges upon their voluntary return to the military after having been absent without leave.

Light sentences for the murders of Iraqis

Some of the more prominent cases where US military personnel have been court-martialed, but not necessarily convicted, for the murders of Iraqi civilians include:

On August 29, 2008, a civilian jury in Riverside, California, acquitted former US Marine Sergeant Jose Nazario Jr. on charges of voluntary manslaughter in the deaths of four unarmed Iraqi detainees during the siege of Fallujah, Iraq, in 2004.

In June, 2008, a U.S. military judge dismissed charges against Lieutenant Colonel Jeffrey Chessani, who had been accused of failing to investigate the November 2005 massacre of 24 unarmed Iraqi civilians in the town of Haditha. Of the eight Marines originally charged in the Haditha massacre, only one still faces prosecution. Criminal charges have been dismissed against six of the Marines and a seventh Marine was acquitted.

In 2007, seven Camp Pendleton Marines and a Navy corpsman were charged with murder and related offenses in the April 2006 kidnapping and killing of a 57-year-old retired Iraqi policeman in the village of Hamdania northwest of Baghdad. Only one of the men, squad leader Sergeant Lawrence Hutchins III, remains in jail, convicted of murder and sentenced by a Camp Pendleton military jury to 15 years. The other six either served out the terms they agreed to in plea deals or had their sentences commuted by Lieutenant General James Mattis, the Commanding General of Camp Pendleton. Mattis ordered the men below Hutchins’s rank released after a military jury in July 2007 found Corporal Trent Thomas guilty for his role in the murders but limited his sentence to time already served. In releasing the others, General Mattis determined that Thomas’s sentence created an unfair disparity for his fellow Marines who had been convicted with higher sentences.

In December 2007, US Marine Reservist Lance Corporal Delano Holmes was convicted of negligent homicide for the stabbing death of Iraqi Army Private Munther Jasem Muhammed Hassin, a man he shared guard duty with at Camp Fallujah, Iraq, on December 31, 2006. Holmes killed Hassin, stabbing him 17 times, slashing him another 26 times and nearly slicing his nose from his face. A military jury sentenced Holmes to time served, the second time in five months that a Camp Pendleton Marine military court jury allowed a defendant convicted in a homicide case to be sentenced to only time served. Holmes was reduced in rank from lance corporal to private and given a bad conduct discharge.

In August 2008, Article 32 hearings were held in Vilsek, Germany, to determine whether to proceed with criminal charges against Staff Sergeant Jess Cunningham and Sergeant Charles Quigley for the death of an Iraqi. The hearing officer has not yet decided whether the two will be court-martialed.

In only one murder case in Iraq have convicted US military personnel received substantial sentences. In August 2007, a military jury convicted US Army Private First Class Jesse Speilman of rape and four counts of felony murder for the rape and murder of Abeer Qassim al-Janabi, a 14-year-old Iraqi girl, and the murders of her parents and younger sister on March 12, 2006, in Mahmoudiya, a village about 20 miles south of Baghdad. Speilman was sentenced to 110 years in prison, but will be eligible for parole in ten years. During their court-martial, Specialist James P. Barker and Sergeant Paul Cortez testified they took turns raping Abeer while Private Steven Green shot and killed her mother, father and younger sister. They also testified that Green shot Abeer Qassin in the head after raping her. They then set her body on fire to destroy evidence. Cruz was sentenced to 100 years in prison under a plea agreement and will be eligible for parole in 10 years. Barker pleaded guilty at his court-martial and was sentenced to 90 years in a military prison, with the possibility of parole. Private Bryan Howard was sentenced to 27 months in prison under a plea agreement. Private Steven D. Green was discharged from the Army for anti-social behavior before the murders had been discovered. However, he was arrested and charged with rape and murder in the Western District Court of Kentucky. He will be tried in that court on April 29, 2009. His attorney has filed documents for an insanity defense.

In April 2003, US Army Sergeant Hasan Akbar, a member of the 101st Airborne Division, allegedly threw grenades into a tent at Camp Pennsylvania in Kuwait that killed two officers and wounded 14. Akbar was sentenced to death in April 2005.

In June 2005, US Army 42nd Infantry Division Staff Sergeant Alberto Martinez allegedly killed two superior officers with an anti-personnel mine and grenades inside one of Saddam Hussein’s palaces, near Tikrit, Iraq. Martinez’s court-martial is underway at Fort Bragg, North Carolina. If convicted, he could face the death penalty.

Earlier this week, on September 14, 2008, two US Army soldiers, assigned to the 3rd Infantry Division, were shot and killed, reportedly by another soldier at their base, near the town of Iskandariyah, about 30 miles south of Baghdad. The soldier who reportedly killed the two others is confined and will be brought before a military magistrate this week for pretrial procedural determinations.

Ann Wright is a retired US Army Reserves colonel with 29 years of military service. She also was a US diplomat who served in Nicaragua, Grenada, Somalia, Uzbekistan, Kyrgyzstan, Sierra Leone, Micronesia and Mongolia. She was on the small team that reopened the US Embassy in Kabul, Afghanistan, in December 2001. She resigned from the US diplomatic corps in March 2003 in opposition to the Bush administration’s decision to invade and occupy Iraq. She is the co-author of "Dissent: Voices of Conscience," profiles of government insiders who have spoken and acted on their concerns of their governments’ policies.