Micah Turner, AWOL and on the road 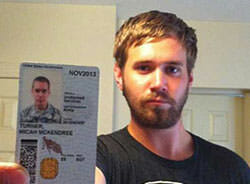 I had the honor of interviewing my new hero, Army Sgt. Micah Turner, the other day.   Micah has been busy speaking truth to power, wherever he can, since he went AWOL from the army last month.  Here is what he told me:

“The reason I joined the army was because I was 19 and I was a wild-land firefighter and I fell in love with the camaraderie, working to achieve a common goal.  I wanted to serve my country in the best way I could after 9-11.  I believed that we were attacked and I wanted to defend my home.

“Rather than join the infantry, I decided to try to use my unique skill set in the army.   I ended up making propaganda in Psychological Operations. I have a predisposition to speech and visual art.  I was interested in World War II propaganda.  Bullets win battles. Words win wars.

“For the most part, I was in an office trying to figure out ways to influence Afghan people.  I have a combat badge for getting shot at while I was conducting a leaflet drop.  I was throwing leaflets out the back of a C130 cargo plane.  The only other combat experience I had was doing Product Analysis outside the FOB [Forward Operating Base] with Afghan locals.  I was asking Afghans what they thought of the products I’d made—leaflets, posters, and handbills.

“After four combat tours, I realized that the wars in Afghanistan and Iraq were not for the causes that had been stated.  Everyone who was blamed for 9-11 was dead or in jail and yet we were still subject to war.   So, when returning from my post-deployment leave from my fourth tour, I went AWOL from the U.S. Army and started speaking out at any venue I could, against the war.  I left Fort Bragg, North Carolina on September 7th.

“My first time, publicly speaking, was with Medea Benjamin from Code Pink at the Green Festival in D.C.  I spoke about my experience in the war and how it was wrong for us to be using our resources on the war when they could be used for so many better things.   From there, I spoke openly for the first time about my AWOL status at Freedom Plaza on October 6th.

“On the 11th anniversary  of the war in Afghanistan, I spoke at the Vietnam Memorial in New York City with the Veterans for Peace.   That night, I attempted to turn myself in at Fort Hamilton but was turned away and told to report back at 8:00 A.M., promptly, the next morning, which I did.  They turned me away again because it was Indigenous Rights Day aka Columbus Day.  On advice from my lawyer, I discovered that their action [of turning Micah away], had renewed my AWOL status.

“I am currently working on my Conscientious Objector paperwork and speaking out everywhere that will have me.  I’m traveling with Occupy the Roads. They travel in an RV to all the different Occupies around the country.” 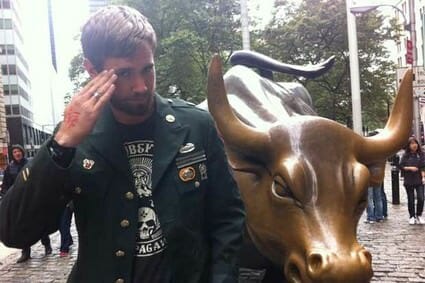 Micah Turner salutes next to the Wall Street bull in New York City.