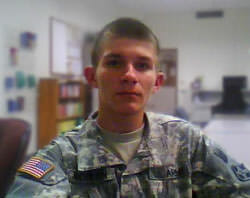 The U.S. Army court martialed Private Tony Anderson today for his refusal to deploy to Iraq in July. He was sentenced to 14 months in an Army stockade following the brief trial at Fort Carson, Colorado. More information coming soon. Courage to Resist pledged $1,500 to cover Tony’s civilian legal defense; however, we’re still $450 short.

Tony will be held at the local civilian jail for the next couple of weeks. Please write him today at: Tony Anderson / El Paso County Sheriff’s Office / 2739 E. Las Vegas / Colorado Springs, CO 80906

“As more troops refuse to deploy, getting conscientious objector status is an uphill battle”
By Sarah Lazare, Courage to Resist Project Coordinator, for Alternet. October 8, 2008

“I don’t feel that it’s right to take someone else’s life,” said 19 year-old Tony Anderson, Private in the U.S. Army, in a quiet voice on the phone. “I felt that if it came down to it, I couldn’t kill someone, in Iraq or anywhere.”

Anderson was speaking while under the line-of-sight supervision of his commanding officer at Ft. Carson, Colorado where he is stationed. The young soldier, who refused to deploy to Iraq in July of this year, is under close restriction by the military and has been threatened with a prison sentence for refusing to fight. Despite these dire consequences, Anderson has decided to join the growing ranks of troops who are openly resisting service in the Iraq War.

After haggling with his commander, Anderson received permission to take the rest of his call in private. It was then that he shared his story.

Hailing from the small city of Wilkes-Barre, Pennsylvania, Anderson says that he was never very attracted to military life, but joined the service at the behest of his father, who had always regretted not joining the military himself. Once in the ranks, Anderson realized that he had made an unfortunate decision. During basic training, he found himself ethically opposed to taking a human life in a military conflict. He was disturbed by seeing soldiers on his base return from Iraq deeply traumatized from their experience in combat. “I didn’t want to mess myself up for the rest of my life doing something I didn’t want to do to begin with,” he says.

Anderson had vague thoughts about filing for conscientious objector (C.O.) status but was discouraged from doing so by his commanding officers, who told him that it would not be possible for him to obtain, and even falsely informed him that he was “not the right religion.” Anderson was led to believe that filing a C.O. application would be futile.

Anderson is not alone: a growing number of U.S. troops are refusing to fight in the so-called “war on terror.” Army soldiers are resisting service at the highest rate since 1980, with an 80 percent increase in desertions, defined as absence for more than 30 days, since the invasion of Iraq in 2003, according to the AP Press. Over 150 resisters have come out publicly against the war, and some cases, such as Lt. Ehren Watada, the first army officer to refuse to deploy to Iraq, have garnered widespread support and attention.

Meanwhile, an increasing number of active duty G.I.s have been joining Iraq Veterans Against the War (IVAW), an organization comprised of over 1,200 U.S. veterans who have served since September 11, 2001. With 12 active duty members at Anderson’s base alone, IVAW has taken a position of open support for G.I. resisters.

The rising number of troops who do not want to join the war face a challenge because conscientious objector status is difficult to obtain. C.O.s must prove that they are opposed to war in all forms, that their objection is based on “religious training and belief,” which can include moral or ethical training, and that their beliefs are “sincere and deeply held.” The application process is arduous and includes written applications, a series of examinations, and a hearing with an investigative officer. A decision on an application can take up to a year, and in the interim a C.O. application cannot forestall deployment to a combat zone, although it can help ensure that applicants are assigned duties which conflict as little as possible with C.O. convictions. Applicants face pressures to drop the issue from commanding officers, who “accidentally” lose the applications, impose informal punishments on C.O. applicants, or give false information about the process, as in the case of Anderson.

There has been no reliable study of the difficulty of obtaining C.O. status. The Government Accountability Office (GAO) released a report finding that between 2002 and 2006, the Marine Corps and Coast Guard approved a third of C.O. applications, Army officials approved 55 percent, the Air Force approved 62 percent, and the Navy approved 84 percent. Critics claim, however, that these figures are grossly misrepresentative, as they do not factor in the number of potential applicants who are deterred at all stages of the process: anyone who did not make it entirely through the application process was not counted by the GAO.

Elizabeth Stinson, Director of the Sonoma County Peace and Justice Center, urges potential applicants not to be deterred by the difficulty of obtaining C.O. status and counsels them to seek support from allies in the peace movement. “Applying for conscientious objector status is hard,” she says. “You will be abused, hazed, systematically degraded and dehumanized whenever possible. Still, I would love to see the amount of conscientious objector applicants go up. For some, it can be the most liberating thing ever.”

“There is a huge problem with people being discouraged by the chain of command from going through the process of applying for C.O. status,” said Andrew Gorby, who was discharged from the Army in May 2007 as a conscientious objector and now works for the Center on Conscience and War, a counseling organization that works to defend the rights of conscientious objectors. “But being granted C.O. status is possible. It is a matter of getting in touch with a qualified C.O. counseling organization.”

Private Anderson recently chose to apply for C.O. status, this time with the extra help of his lawyer. “I am nervous to see what’s going to happen to me,” said Anderson over the phone. The military is charging Anderson with disobeying a lawful order from a commissioned officer during a time of war and desertion with intent to avoid hazardous duty. Anderson’s civilian lawyer, James Branum, is currently talking to the military in hopes of avoiding a court martial. However, he expects the case to go to trial in October or November.

Branum expressed frustration with the lack of options for C.O.s, citing the recent case of Robin Long, an Iraq War resister who was deported from Canada into U.S. military custody last month and sentenced to 15 months of confinement. According to Branum, Long’s arguments in court about his conscientious objection to war were met with little sympathy, and possibly even hurt his case. “There is no fair process for cases of conscience,” Branum says.

The Center on Conscience and War is currently crafting a Military Conscientious Objector Act that seeks to make this a more fair process. The act, which advocates hope will soon be introduced to Congress, protects objectors’ rights to apply for C.O. status and broadens the definition of conscientious objection to include opposition to specific wars, something recognized by Amnesty International.

“Tony’s refusal to deploy simply underscores that he is a conscientious objector, and it is not his fault that the military denied him the opportunity to go through the application process,” said Jeff Paterson, Gulf War resister and Project Director for Courage to Resist, a group that supports war resisters. “I commend his courage in sticking to his conviction and refusing to deploy, despite the challenging situation he faces.”

Asked whether he regrets his decision to refuse deployment, Anderson said that, given the lack of options, it was all he could do. He expressed dismay at having disappointed his father and fear of the punishment he faces from the military. “The consequences suck,” he said just before getting off the phone. “But more than anything else, I am happy that I am not going to Iraq.”

Sarah Lazare is the Project Coordinator of Courage to Resist, an organization that supports military war resisters.