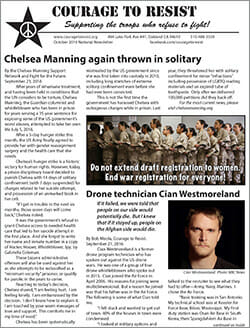 Thousands of Courage to Resist supporters are receiving our October 2016 newsletter (PDF) in their mailboxes this week.

Also included was our fundraising appeal, on behalf of Chelsea Manning, as well as other war objectors. That’s also available here (PDF).