“Stand with Ferguson protesters, not the police!” 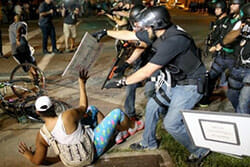 Veterans’ appeal to National Guard: “Stand with Ferguson protesters, not the police!”

To our brothers and sisters in the Missouri National Guard: We are writing to you as active-duty U.S. service members and veterans, most of us having served in the Iraq war.

You have a choice you can make right now.

The whole world is watching the Ferguson police with disgust. They killed an unarmed, college-bound Black youth in broad daylight, and subsequently responded to peaceful, constitutionally-protected protests with extreme violence and repression…. Now, Governor Nixon has again activated the National Guard to “support law enforcement.” But you don’t have to follow their orders—you can stand with the protesters instead.