March on the Pentagon 3/21, resister outlines why

If we were to ask everyone planning to travel to Washington this month to march on the Pentagon, I’m sure we would get several different answers. For many people in the United States, they will be taking to the streets to demand an end to the sixth year of war on Iraq. But that is not the entire truth—in reality, the war is nearing its 19th year. Here are a few of the reasons why I will be marching.

“I encourage everyone to do as much as you can and join me in Washington D.C., on March 21 to say loudly and clearly: From Iraq to Afghanistan to Palestine, occupation is a crime.”

I was sent to Iraq in March of 2003 as part of the invasion force in a war that I did not believe in. I was stationed in Italy, and due to the fact that we were really unable to stay current on the news, I had no idea that so many people here in the United States were opposed to the war as well.

While in Iraq, I was able to witness the extent of the devastation caused by the almost 20 years of constant bombardments and the genocidal sanctions placed on the people of that country.

The smell was often unbearable. Stagnant water and sewage filled neighborhood streets due to the intentional targeting of Iraq’s sewer system and its water treatment facilities. Barefooted kids ran through these streets—not minding it all—because it is all they had ever known.

The infrastructure had been reduced to rubble. Garbage lined what were once grand streets and avenues. Human needs were unable to be met, not because of what U.S. propaganda called a “brutal tyrant,” but due to strict economic sanctions on the people of Iraq.

This was the true face of occupation.

This is not what young idealistic people join the military to participate in, but these policies were what we were all forced to continue. And I wanted to write briefly about a few of the things I witnessed while I was deployed to Iraq from March 2003 until April 2004.

When I made it to my unit, I was the oldest member of my squad. Even within my platoon there were not too many soldiers that were older than myself. I was 23.

When we stepped into Iraq, we were all children. All of us were unprepared mentally for what we were about to participate in, unprepared for what we would be forced to observe and take part in.

Immediately upon entering any town or city, you could feel and see the effects of the sanctions and the brutal “Shock and Awe” bombings that were policies for decades.

Electricity was sparse due to the targeting of Iraq’s power grid. Gasoline and diesel were being sold on the black market; gas stations could not operate because fuel wasn’t being delivered. Most of the men in Kirkuk, the city I was primarily located in, had turned their family vehicles into taxi cabs in an attempt to put food on their tables. Obviously this was a hard profession to continue without fuel supplies.

Casualty rates for the war in Iraq are estimated at being well over 1 million. This number is nowhere near the actual figures. Because of the illegal sanctions placed on them by the U.N. Security Council, nearly 2 million Iraqis, including 500,000 children, were killed before the invasion ever took place.

I don’t just want to leave you with statistics, but I think it’s important to get an understanding of what the people of Iraq have been suffering through in the last 20 years.

The U.N. estimates that nearly 2.2 million Iraqis have fled the country since 2003, with nearly 100,000 fleeing to Syria and Jordan each month.

According to estimates by the U.N. High Commissioner for Refugees, over 4.7 million Iraqis have been displaced since the U.S.-led invasion of Iraq in 2003.

The humanitarian crisis in Iraq is the worst in the Middle East since nearly 1 million Palestinians were forcibly removed from their lands in 1948.

Of those millions of refugees, government figures as of April 2008 show that 2,627 Iraqis have been cleared to enter the United States since Oct. 1, 2007. An additional 5,000 have been approved for entry within the next three months, and 8,000 more have been contacted for interviews.

To put this in perspective, Iraq’s population is 29 million. Of that number, over 3 million are dead, 2 million have fled the country and nearly 5 million have been displaced, having lost their homes and their livelihoods.

These numbers are forgotten. And to say forgotten isn’t the entire truth; these numbers aren’t made public for many reasons which would be harmful to the United States’ continued occupation in the Middle East.

The only numbers we hear are the nearly 4,400 U.S. soldiers that have died for what the ruling class calls “spreading democracy.”

One particular event that I think about often is the first day that my platoon was tasked with passing out propane tanks.

Families in Iraq use propane to cook. When the U.S. forces began the massive bombings nearly six years ago, all public service had come to a near halt. And since families needed propane to cook, it was crucial that a system be put into place to provide those services.

The entire process the military came up with was terrible.

The propane tanks were driven around on large trucks, sometimes for extended periods of time to keep the locations secret. A time was never given to residents of the city for when they could come get their cooking supplies. And the locations changed every time.

The military claimed the secrecy allowed soldiers to set up the area without having a horde of people flooding the area. So we would quickly set up concertina wire, which is similar to barbed wire but a bit different. It has sections that aren’t as sharp as razors, but very close to it.

The wire was set up so that Iraqi women would be forced to stand in a near single-file line, or risk being injured on the concertina wire. I can recall that their dresses were always being ripped and caught up in the wire.

These women would have no other option, but to wait for hours in the unbearable heat, hoping that they would be able to cook for their families that night. There were never enough tanks of propane. Women who were turned away would be in tears—unsure of exactly when propane would be passed out again. I tried to reassure them that more would come, but truthfully it wasn’t up to me, and I had no idea of when it would come either.

There would be outbursts at times, when people would be in such a panic that it felt as if a riot might take place. I can recall countless times when U.S. soldiers had rifles inches away from the faces of these women, who wanted nothing more than to eat.

Looking back, this was nothing more than an assault on every family in Iraq. There are hundreds of stories similar to this.

My unit seized vehicles at random, based on whether someone had papers for their vehicle. I don’t know how many of you carry the title to your vehicle with you at all times, but most people in Iraq don’t even have a title.

People were forcefully removed from their homes. SWAT-style arrests were made—dozens of men would storm these houses with rifles ready, frightening the entire family. Often times my unit wasn’t sent to the home of the person the United States intended to arrest, but commanders on the ground still detained the individuals without any reason except to demonstrate the productivity of their unit.

We were spreading fear. This is the nature of occupation.

Certain individuals in the Pentagon hoped that, if U.S. forces passed out propane and things of that nature, the people of Iraq would somehow think that the U.S. military was in Iraq to help them. There was hope that the victims of U.S. aggression would somehow embrace their oppressors.

This hasn’t happened. And will never happen.

The Iraqi people have a long history of resistance to neocolonialism, not only against the British mandate in the early 1900s, but also during the 1958 revolution that overthrew the Iraqi monarchy. Their struggle today is another example of their self- determination.

The United States did not send soldiers to the Middle East to pass out food, propane or medical supplies. And U.S. soldiers were not sent to Iraq to build schools or hospitals.

I was one of those soldiers. A member of an organization that has one mission—and that mission is to seize land by force and if it must—to kill anyone that resists its will.

I deserted the U.S. Army in April 2007 unable to continue participating in these occupations. And here I am today—helping to organize a national demonstration in Washington, D.C.

This is why I am marching. Not just for the millions who have died and the millions who have been driven from their lands in Iraq, Afghanistan and Palestine, but for every victim of U.S. imperialism across the globe. To include the nearly 2.5 million U.S. families that are losing their homes every day while the U.S. government spends $12 billion each month on its criminal wars.

We can’t lay the responsibility to end these occupations on the new president of the United States. It is appropriate to recognize this historic event—an African American sitting at the highest seat of power in the country. But we have to understand that Democrats and Republicans seek the same goals. Their tactics and strategies may be different, but in the long term both parties are fighting for the same goal.
President Obama has already launched air strikes into Pakistan—a country that the United States has not even declared war with. He has signed orders for 17,000 soldiers and marines to be shipped off to Afghanistan to increase the violence on the Afghan people. There is no sign that he will end the war in Iraq. Billions are being spent while the people in America lose their jobs and homes, and prices for education skyrocket.

This is why it’s vital we continue our struggle against these occupations.

I encourage everyone to do as much as you can and join me in Washington D.C., on March 21 to say loudly and clearly: From Iraq to Afghanistan to Palestine, occupation is a crime. 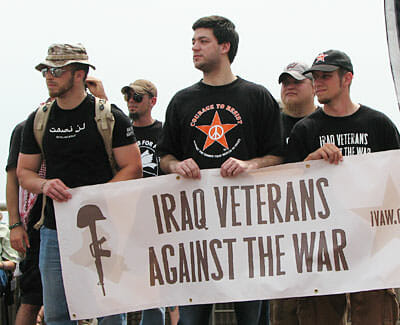 In April 2007, while his unit was preparing to deploy to Afghanistan, James Circello left the military. Months later, he issued an open letter to the U.S. government declaring he had officially resigned from the military. While AWOL he delivered speeches along the devastated Gulf Coast, making the wars in Iraq and Afghanistan personal to many of Hurricane Katrina’s survivors.

In November 2007, James Circello turned himself in to the military at Fort Knox and was discharged administratively within three days.

James is currently active with the Washington, D.C., chapter of Iraq Veterans Against the War and with the ANSWER Coalition—Act Now to Stop War and End Racism, and is one of the organizers of the March 21 March on the Pentagon.