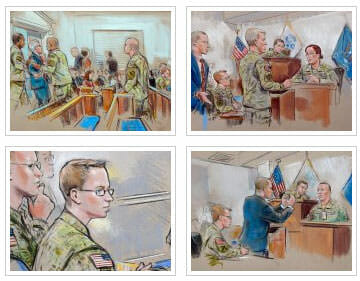 Last week I spent two days in court for a pretrial motions hearing in the court martial of Bradley Manning, the private accused of leaking documents to WikiLeaks that showed widespread unethical and illegal behavior by the Department of Defense and State Department.  Manning has suffered the fate the Queen put on Alice when she was in Wonderland, ” Sentence first — verdict afterwards. ” By the time his court martial is actually held he will have been incarcerated for more than two years, one of those years was spent in solitary confinement. But, that is only one of many obvious injustices Manning is being subjected to.