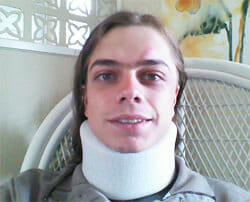 Scott is a Marine veteran who did two tours in Iraq. He was hit by a police projectile during the October 25, 2011 brutal police crackdown of Occupy Oakland.  He was in serious condition at an Oakland hospital for weeks with a skull fracture and swelling of the brain. He’s been released from the hospital, and shares this message:

“I’m feeling a lot better, which a long road in front of me. After my freedom of speech was quite literally taken from me, my speech is slowly coming back, but I’ve got a lot of work to do with rehab. Thank you for all your support, it has meant the world to me. You’ll be hearing more from me in the near future and soon enough we’ll see you in our streets”

Oakland CA (October 26, 2011) – Scott Olsen, a Marine veteran who did two tours in Iraq, was hit by a police projectile during last night’s brutal crackdown of Occupy Oakland.  He is in serious but stable condition at an Oakland hospital. Friends have reported that Scott has a “skull fracture and swelling of the brain.”

Scott is 24 years old, and was with 3rd Battalion, 4th Marines, before leaving the military last year. He is a member of Iraq Veterans Against the War, Veterans for Peace, and a Courage to Resist supporter.

It’s ironic that days after Obama’s announcement of the end of the Iraq War, Scott faced a veritable war zone in the streets of Oakland last night.  He and other protesters were surrounded by explosions and smoke (tear gas) going off around him as people nearby carried him injured while yelling for a medic. 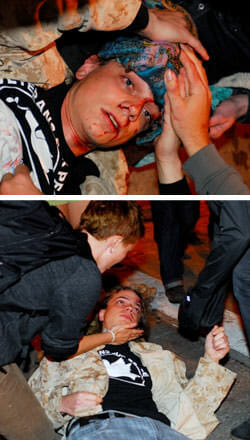 Tell Oakland Mayor to end the brutality and investigate this incident: