Last month Army Spc Eleonai “Eli” Israel, while stationed at Camp Victory in Baghdad with JVB Bravo Company, 1-149 Infantry of the Kentucky Army National Guard announced that he would refuse any combat role in Iraq. Afterwards, Eli noted “It would have been a lot “easier” for me to simply keep doing combat missions for a couple more weeks, and be done with things. Moral convictions are not based on timing or convenience.”

He is scheduled to be released today from the Theater Field Confinement Facility at Camp Arifjan, Kuwait were he served a 30 day sentence. Eli pleaded guilty to five counts of disobeying orders at a summary court martial. He expects to receive an Other Than Honorable discharge and to be flown to Mississippi within a couple of weeks. After he’s out, he plans on fighting for a discharge upgrade as the officer who sentenced him ignored his application for discharge as a conscientious objector or take into account his prior service.

On June 19, Army Spc Eleonai “Eli” Israel put himself at great personal risk by making the courageous decision to refuse further participation in the U.S. occupation of Iraq. The 26-year-old from Arlington, Virginia told his command that he will no longer be a combatant in this illegal, unjustified war. Eli believes that the U.S. government used the attacks of September 11, 2001 as a pretense to invade Iraq and that “we are now violating the people of this country (Iraq) in ways that we would never accept on our own soil.” Eli is stationed at Camp Victory in Baghdad with JVB Bravo Company, 1-149 Infantry of the Kentucky Army National Guard and intends to seek a discharge as a conscientious objector.

Yesterday, Eli’s urgent message from Baghdad buzzed around the Internet:

I have told them that I will no longer play a ‘combat role’ in this conflict or ‘protect corporate representatives,’ and they have taken this as ‘violating a direct order.’ I may be in jail or worse in the next 24 hours. Please rally whoever you can, call whoever you can, bring as much attention to this as you can. I have no doubt that the military will bury me and hide the whole situation if they can. I’m in big trouble. I’m in the middle of Iraq, surrounded by people who are not on my side. Please help me. Please contact whoever you can, and tell them who I am, so I don’t ‘disappear.’

After receiving support and advice from a number of organizations, including Courage to Resist and Iraq Veterans Against the War, Eli has sent this update today:

Thank you for your support. I am currently “OK”, thanks in no small part I’m sure to the voices that have spoken up in the name of peace. I don’t know what the military’s next steps are going to be, but my deeply held beliefs prevent me from participating in this or any other war….

It would have been a lot “easier” for me to simply keep doing combat missions for a couple more weeks, and be done with things. Moral convictions are not based on timing or convenience, and I thank all of you for your being here for me now. 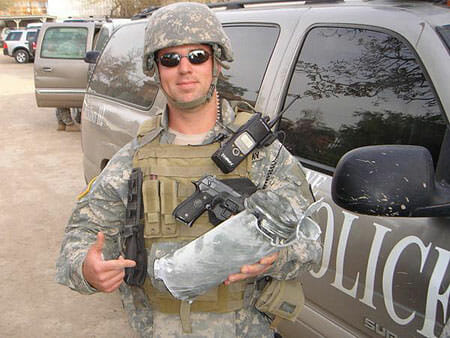 Over the last few months Eli has been blogging from Iraq via MySpace to friends about his experiences. His MySpace tag line proclaims, “I have seen ‘war’, and I want no part of it.” No doubt that it was voices such as his that led the Army to crack down on “unauthorized” military bloggers recently—and ban MySpace altogether from military networks.

Here are a few excerpts of Eli’s recent posts to friends:

I could spend the rest of my time here (shooting, getting shot at, and watching my friends get killed and maimed) “wondering” why the Bush/Cheney administration lied to me. But I really don’t think that I have to understand in full what their interests were in order to understand that they were not my interests, either as a soldier or as a civilian.

I want you all to know, that most of us that are over here, came to Iraq, with the very best of intentions, and really thought that the Iraqi people wanted us here. Now that I’m here, I realize that they want to work it out themselves, and I know we should respect that.

One guy lies about the reason for sending me to Iraq, and then tries to keep me here even after he’s caught. Another guy actually believes that we can make up reasons as we go, and still wants to believe the original lie. The third guy realizes it was a lie, but thinks it’s the people who were told the lie—and who paid the greatest price for it (those wearing uniforms)—that should be blamed for not making the lie out to be “OK” in the end. This war is and was lost, but not by the military.

I’m attune enough to know that even the kindest Iraqi families that manage a “wave” to me as I pass by (when not done in fear), do it because my smile lets them know that I’m only doing my job, and that I’ll try my best not to let my weapons of war hit their children when I have to defend myself that day. 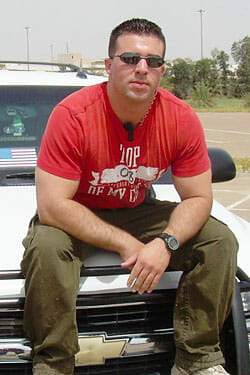 There are a lot of military personnel here who are trying their best to protect as many Iraqis as we can while we are here, and trying to do as much good as humanly possible until we do leave. Many U.S. soldiers here have risked their lives protecting Iraqi families, and even shielded Iraqi children with their own bodies in the midst of street wars. You can be proud of that. Don’t let the blow to our self-image that the current problems have caused make us forget that we are a good people, and it is us, the true Americans, who are going to fix this and make it OK.

Eli is taking an incredible risk by speaking out and pledging to refuse orders in Iraq. As Eli has been working as a body guard to high ranking officers and civilian VIP’s, it’s unlikely that the military will keep him in such high-profile role, regardless of what other actions they take against him for his courage to resist.

We need to do everything we can to ensure that the Army respects his rights and does not illegally retaliate against him.

Portions of this article by Iraq Veterans Against the War.