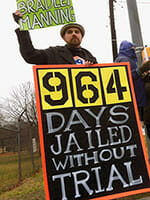 Bradley Manning, a 25-year-old Army intelligence analyst, is accused of releasing the Collateral Murder video, which shows the killing of unarmed civilians and two Reuters journalists by a US Apache helicopter crew in Iraq. He is also accused of sharing the Afghan War Diary, the Iraq War Logs, and series of embarrassing US diplomatic cables. These documents were published by the anti-secrecy website WikiLeaks, and they have illuminated such issues as the true number and cause of civilian casualties in Iraq, along with a number of human rights abuses by U.S.-funded contractors and foreign militaries, and the role that spying and bribes play in international diplomacy. He has twice been nominated for the Nobel Peace Prize for his heroic and noble actions. For over 960 days he has been imprisoned without trial, 11 months of which were spent in solitary confinement at Quantico prison, where his treatment has since been judged to have amounted to unlawful pretrial punishment.

Pre-trial hearings at Ft. Meade brought new developments for Pfc. Bradley Manning’s defense, including four months of sentencing credit, another three-month trial delay, debates over the failure to try Manning within reasonable time, and an effort to make whistle-blowing treasonous.

Bradley Manning has been to Ft. Meade for three hearings in the last two months, including the marathon Article 13 motion surrounding Bradley’s torturous nine months in Quantico, a 112-day reduction in a potential sentence, speedy trial litigation, arguments over how motive will play into the ‘aiding the enemy’ charge, and another court-martial delay. The trial is now scheduled to start June 3, 2013, with pretrial hearings set for February 26 – March 1 and May 21-24. 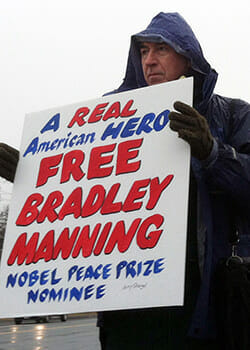 Following over two weeks of testimony from Quantico guards and higher officers about keeping Bradley in a 6×8 cell for 23 hours a day and denying him exercise time and easy access to basic hygiene items Judge Denise Lind ruled that Bradley was treated harshly and awarded him 112 days off of a potential sentence. This is a meager rebuke and a scant reduction when compared to the life sentence Bradley could face, but it is an important symbolic vindication for those who fought so hard to raise awareness of the disturbing treatment and to move Bradley from Quantico.

Three years is not a speedy trial

On Bradley Manning’s 964th day in prison without trial, both parties argued over the defense’s motion to dismiss charges for lack of a speedy trial. Under Rule for Court Martial 707, the military was supposed to arraign Bradley in 120 days, but it took over 600. Under Uniform Code for Military Justice Article 10, prosecutors are obligated to maintain diligence in trying the accused. Defense lawyer David Coombs explained to the court that rather than being proactive, the military was reactive, waiting for months and months for other agencies to complete classification reviews, when it should have been hurrying those processes along to get to court-martial as quickly as possible. If Judge Lind finds Article 10 was violated, she must dismiss charges. If she dismisses charges “with prejudice,” meaning she finds that the military was prejudicial in denying Bradley a speedy trial, then Bradley will walk free. However, if she dismisses “without prejudice,” finding the delays were negligent but not malicious, the military could simply re-charge Bradley with all of the same offenses. She’ll rule at the next hearing, February 26 through March 1. 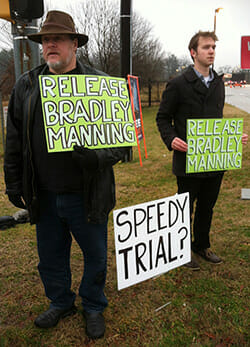 Meanwhile, in an attempt to curtail the defense’s ability to show Bradley Manning is a whistle-blower, the government moved to preclude discussion of his motive in determining his guilt or innocence. Judge Lind granted this motion in part: the defense will not be allowed to show Bradley’s motive, such as chatlog quotes showing that he wanted information to be free, in debating whether he knew Al Qaeda would have access to the cables he released (but it will be allowed to discuss motive during a potential sentencing portion). The military will have to prove that Bradley knew he was “dealing with the enemy” in passing information to WikiLeaks. The defense will be allowed to show that Bradley selected certain cables or types of cables to prove he knew which information would not cause harm to U.S. national security if made public. The government also moved to preclude discussion of over-classification, trying to prevent the defense from arguing that documents released needn’t have been classified in the first place. Judge Lind decided to defer that ruling, and will make it at a later hearing. In this hearing, the military also said that it would still charge Bradley Manning with “aiding the enemy” if he’d released information to the New York Times instead of WikiLeaks, an argument that would effectively turn whistle-blowing into treason and one which troubled many journalists following the proceedings.

The defense is currently determining which classification information it will need to present during the court-martial. Once it notifies the government of that information, prosecutors have 60 days to determine how to handle those documents in court. They can redact, substitute, or summarize them, or they can ask the court to hold closed sections, open only to the judge, defense, prosecution, and security experts with sufficient clearances. Therefore, the trial is tentatively scheduled to begin June 3, 2013.