Photos from the “Free Bradley Manning” rally Aug. 8 at USMC Quantico Base, VA

Manning, a 22 year old intelligence analyst stationed in Iraq, stands accused of disclosing a classified video depicting American troops shooting civilians from an Apache helicopter in 2007. Eleven adults are killed in the video, including two Reuters employees, and two children critically injured. The video, available at www.collateralmurder.com, was published by WikiLeaks on April 5, 2010. No charges have been filed against the soldiers in the video.

Bradley Manning faces up to 52 years in prison if convicted of the charges against him.

While news sources have speculated about Manning’s involvement in a new leak of over 90,000 secret documents (collectively known as the Afghanistan “war logs”) made public by WikiLeaks on Sunday, no charges regarding this recent breach have been filed.

As of this writing, Manning has not yet chosen a civilian attorney to defend him in the expected trial. While several news sources had previously indicated that funding for Manning’s legal counsel was already arranged, the Bradley Manning Support Network states that there is an immediate need for donations to his legal defense.

Legal defense in this case will be particularly expensive because any legal team will most likely need a background in military law and the flexibility to travel overseas for the trial as well as secret security clearance.

“We have heard from the family and the military lawyers assigned to Bradley that the cost of his defense will be significant,” said Mike Gogulski, an online activist and founder of the Bradley Manning Support Network. “We are also concerned that Bradley may choose his legal counsel based on his available funds. If he fears his family will absorb the cost of the trial, he might choose a less experienced, less expensive attorney. We’re very concerned about the ramifications of such a decision.” 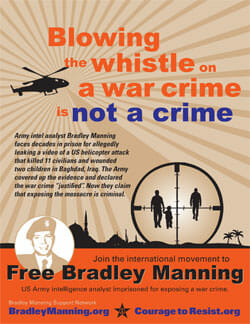 The Bradley Manning Support Network passed a resolution on July 12, 2010 to begin fundraising for Manning’s legal defense. At this time, the Network estimates between $50,000 and $200,000 in legal fees and expenses will be needed to mount a vigorous defense on behalf of Manning. They have also indicated that WikiLeaks, who published and promoted the Collateral Murder video, has promised a significant donation to Manning’s defense.

“If Manning is the source of the video, then he did what he had to do to expose a possible war crime. So regardless, he’s wrongly imprisoned and we want to do everything possible to support him,” said Jeff Paterson, Project Director of Courage to Resist. “I know from past experience working with military objectors that public support and the right civilian defense team can be the difference between an administrative separation and years in the stockade.”