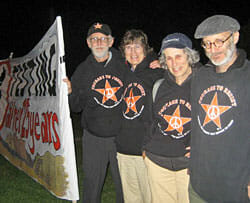 Before sunrise this morning, the U.S. Air Force launched a Minuteman III Intercontinental Ballistic Missile (ICBM) from Vandenberg Air Force Base in southern California. The missile is designed to deliver a lethal nuclear payload capable of killing millions of human beings. Four members of Courage to Resist from the San Francisco Bay Area joined other opponents of U.S. military policy outside Vandenberg’s main gate to protest the launch.