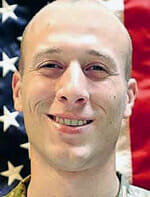 FORT DRUM, N.Y. (AP) — A West Point graduate who cited his religious beliefs in a lawsuit against the Army while serving in Iraq has been granted conscientious objector status and given an honorable discharge.

Capt. Peter Brown, a 2004 graduate and member of the 10th Mountain Division, said his religious convictions prevented him from carrying a loaded weapon or ordering his men to use lethal force.

“I’m relieved the Army recognized that my religious beliefs made it impossible for me to serve as a soldier,” Brown said in a news release issued Tuesday through the American Civil Liberties Union, which had intervened and filed a lawsuit on his behalf in U.S. District Court in Washington.

Brown was stationed in Baghdad for more than a year with the 2nd Battalion, 14th Infantry Regiment out of Fort Drum in northern New York. His conversion to a pacifist interpretation of the Bible began after his commission into the Army when he attended a civilian religious center in the Netherlands in 2004, the lawsuit said.

While in Iraq, Brown applied for discharge from the Army as a conscientious objector. Though a chaplain appointed by the Army and an investigating officer both concluded that he was sincere and recommended an honorable discharge, the Army disagreed and denied his request.

The ACLU and its New York chapter sued in July, asking a federal court to order the Army to reverse its decision. Before the court could act, the Army reconsidered and granted Brown’s request Aug. 28, NYCLU spokeswoman Jennifer Carnig said. The announcement was delayed until after Brown’s return from Iraq in September.

“Peter Brown showed by clear and convincing evidence that he is a deeply sincere conscientious objector because of his religious training and beliefs,” Karpatkin said. “It should not have required the filing of a lawsuit for the Army to recognize those beliefs.”

Army officials at Fort Drum had no immediate comment.

Brown said he planned to move to the St. Louis area and continue seminary classes that he started by correspondence from the war zone.

According to government figures, there were 426 applications for conscientious objector status from 2002-06, with 224 approved, 188 denied and 14 still pending.