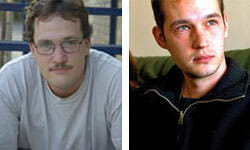 In the past weeks, the Harper Administration has moved swiftly to push U.S. Iraq War resisters out of Canada, issuing removal orders to five more resisters who had resettled up north. Two have recently been forced out of the country, and the rest continue their appeals through the Canadian Courts. This adds to the growing number of U.S. war resisters in Canada who are being threatened with deportation and eventually U.S. military court martials and imprisonment.

"According to the Nuremberg principles, people have the right to a free conscience," said Ryan Johnson, a former soldier who refused deployment to Iraq and resettled in Canada in June 2005. "We should be allowed to stay based on that."

Since the beginning of the Iraq War, dozens of U.S. troops resisting service in Iraq have applied for refugee status in Canada, on the grounds that, were they handed back to U.S. military custody, they would face persecution for refusing to participate in an illegal war. Several Afghanistan War resisters have also made Canada their home, with an estimated 200 U.S. war resisters currently residing in that country.

Cliff Cornell, who resettled in Canada after refusing to deploy to Iraq in 2005, returned to the United States when the Canadian government denied him a stay of removal. He was arrested by U.S. border police last week and taken to a county jail in Bellingham, Washington. Following a community vigil at the jail, Cornell was released and given five days to travel to Ft. Stewart, Georgia on his own accord. He is expected to face court martial, and supporters have set up a defense fund to cover his legal fees.

The 28 year-old from Mountain Home, Arkansas refused to go to war because "it just didn’t feel right," he told his supporters at a 2005 rally in Canada. "I don’t want to be killing innocent people."

Chris Teske, a former U.S. Army paratrooper and infantryman who refused recall to Iraq after serving two tours in Afghanistan, also left to the United States after receiving removal orders. Teske was not arrested crossing the border and is currently consulting legal counsel to turn himself in.

"It seems as hard as I try to forget the institution which enslaved me, they have not forgotten about me," Teske said in a January 2009 statement. "I have been denied at every turn in my immigration process. I have now been ordered to leave Canada."

Other resisters, including Kimberly Rivera and Dean Walcott, were issued deportation proceedings in recent weeks, which they appealed through the Canadian judicial system. They have won temporary stays, which will likely delay deportation a few months and could possibly lead to successful appeals.

Several more war resisters-including Jeremy Hinzman, Joshua Key, and Matt Lowell-have been fighting deportation orders for months and have thus far avoided deportation. In a remarkable legal victory, a Federal Court in Canada rejected the reasons given by the Immigration and Refugee Board for denying refugee status to Joshua Key and ordered a new hearing. Hinzman, who arrived in Canada with his wife and son over five years ago, will have an appeal hearing on February tenth. Last year his wife Nga gave birth to a baby girl, who is a Canadian citizen.

The flurry of removal proceedings follows the July 2008 deportation of Robin Long, a former soldier who resettled to Canada rather than deploy to Iraq with his unit. Long was handed over to U.S. military custody, where he was court martialed and sentenced to 15 months of confinement in August, 2008. He was the first resister to be deported from Canada since the Vietnam War.

The government’s actions fly in the face of Canadian popular opinion. Canadians are overwhelmingly in support of allowing war resisters to stay, with 64 percent in favor of granting them permanent residence, according to a June 2008 Angus Reid Strategies poll. In June 2008, a resolution was passed in the Canadian Parliament to allow war resisters apply for permanent residence in Canada. Yet, the minority conservative Harper government has refused to implement this non-binding resolution, and the Canadian Immigration and Refugee Board (IRB) has moved forward with issuing deportation orders to resisters who have applied for asylum.

Jason Kenney, Canada’s new Minister of Citizenship, Immigration, and Multiculturalism, has come under fire in recent weeks for referring to war resisters as "bogus refugee claimants." He stated in a January 2009 interview, "I don’t appreciate people adding to the backlog and clogging up the system whose claims are being rejected consistently 100 per cent of the time."

"The Canadian Council on Refugees and other similar organization have spoken out, saying that Iraq War resisters are certainly legitimate refugee candidates and that this is government interference in the refugee process," refutes Carolyn Egan, of the War Resisters Support Campaign in Canada.

"The U.S. war and occupation of Iraq is now universally recognized as illegal, or at least plain wrong-even by President Obama," said Jeff Paterson, a Gulf War Resister and Project Director of Courage to Resist, a U.S.-based war resister support organization. "Canada as a nation saw this truth before many Americans did. There should be no question that resisters to unjust war are deserving of refuge from prosecution and deployment."

Once issued by the government, the deportation orders are being fought through the Canadian court system. "Recent legal decisions made by the federal courts have been influenced by Canadian popular opinion," said Gerry Condon, a Vietnam War resister and organizer with Project Safe Haven. "Support for war resisters has done a great deal to slow down the deportation proceedings."

Condon noted that even as these deportations are taking place, new war resisters are arriving in Canada. "It is still possible for AWOL GIs to go to Canada," said Condon. "They can apply for refugee status and expect at least a year of freedom in Canada. It is not easy, but it beats going to war or jail."

War resisters in Canada have been met with widespread support from anti-war activists in the U.S. and Canada. The War Resisters Support Campaign in Canada organized an emergency week of action in response to the deportation proceedings, and supporters from the U.S. and Canada appealed to Canadian authorities to allow war resisters to stay. Courage to Resist has helped coordinate solidarity efforts in the United States and is raising legal funds to help defend those who have already been deported.

"We certainly haven’t stopped the deportations, and we may be seeing more in the coming months," said Condon. "But the struggle to support war resisters will continue on both sides of the border."

Sarah Lazare is Project Coordinator for Courage to Resist, an organization that supports war resisters.