U.S. soldiers in Germany now have a GI coffeehouse. The Clearing Barrel Bar and Café opened Saturday, March 24, in Kaiserslautern, Germany, home to Ramstein Air Base and Landstuhl Regional Medical Center, among a constellation of U.S. bases, with 50,000 U.S. military and civilian personnel living in the area. The grand opening was a big success, with over 60 people in attendance.  Well-wishers enjoyed good food and drink, and marveled at the large beautifully remodeled space, with couches, tables, chairs, a bar and barstools, his and hers bathrooms, and a full kitchen.

Beautifully printed posters from the “War Is Trauma” art exhibit were displayed on spacious white walls.  “War Is Trauma,”a collaboration between Just Seeds, an art collective from Brooklyn, New York, and Iraq Veterans Against the War (IVAW), is about “Operation Recovery”, a campaign to stop the deployment of traumatized troops and to focus public attention towards Post Traumatic Stress Disorder, Traumatic Brain Injury and Military Sexual Trauma.

Neighbors, friends, and activists convened from far and near, including Germans and U.S. citizens living in Germany.  Nathan Peld, an IVAW member, arrived after a long train ride from Vienna, Austria, where he is working with the United Nation’s International Atomic Energy Agency (IAEA).

Young German women and men mixed easily with Vietnam-era friends. Political discussions were lively and interesting.  Live music was provided by two young men, one German and one American, who sang and played guitars and were joined by guests in a sing-along. 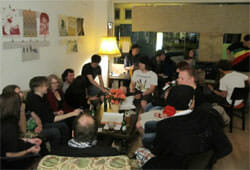 Chris Capps-Schubert, an Iraq veteran and war resister, and his German wife Meike, an organizer-extraordinaire and member of Military Families Speak Out, have been working very hard for the past two years to make their dream of opening a GI coffeehouse in Germany a reality. Their efforts have been supported by the Military Counseling Network, Connection-EV, the Center on Conscience and War, the German Mennonite Peace Committee, members of IVAW and Veterans For Peace, and many other German and American friends and activists.

Meike and Chris are both counselors with the Military Counseling Network, the European branch of the GI Rights Hotline.  Chris has been a member of IVAW for several years and went on a speaking tour around Germany to gain support for The Clearing Barrel project. Chris and Meike and other counselors will be available to help soldiers who are seeking to be discharged from the military, facing other difficulties with the military, or seeking help dealing with military trauma.

Meike said, “Having this space available allows us to bring together in one place what we do personally, socially, culturally, and politically.  I am very grateful for all of the help and support that we have received from the peace community and we hope that they will continue to support us.”

Helen Jaccard and Gerry Condon representing Veterans For Peace spoke of the importance of supporting alleged Wikileaks whistleblower Bradley Manning, and GI resisters like André Shepherd, an Iraq veteran who refused to redeploy to Iraq and is seeking political asylum in Germany. Dave Blalock, a Vietnam-era GI organizer who lives in Heidelberg, Germany, said “This is the beginning of resistance.”

GI coffeehouses were a mainstay of GI resistance in the Vietnam era, providing safe, alternative spaces for soldiers to socialize, learn about their rights in the military, receive counseling, engage one another in political discussions, and organize themselves to resist illegal wars and occupations.  The coffeehouse movement grew throughout the 60sand 70s.  Today’s veterans have revived the coffeehouse tradition in order to build community and resistance.  There are two successful GI coffeehouses in the U.S., Coffee Strong just outside the gates of Joint Base Lewis McCord in Washington State, and Under the Hood at Fort Hood, Texas.

You can find out more about The Clearing Barrel on their Facebook page, GI Café Germany, and on their website, www.GICafeGermany.com.  Donations are still very much needed, so it’s not too late to contribute to this important new resource for our GIs in Germany.