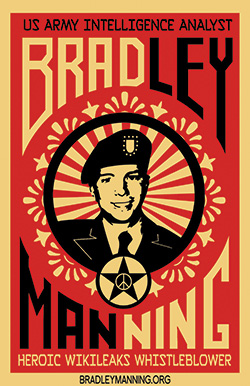 Mass Rally for Bradley Manning at Ft. Meade, Maryland on Saturday, June 1st. Info: 1pm gather (Reece Road and US 175, Fort Meade, Maryland), march and rally to follow. Sponsored by the Bradley Manning Support Network and the national Veterans for Peace and Iraq Veterans Against the War organizations, with the help of Courage to Resist, and many other groups. Chartered bus tickets are available from NYC, Baltimore, Philly, DC, or other cities. RSVP at the Facebook event.

June 1-8: International week of action for Bradley Manning. For those that can’t make it to Ft. Meade, dozens of solidarity events are currently planned worldwide, including: Seoul, Toronto, London, Heidelberg, Cardiff, and Honolulu.

After more than three years of imprisonment, including nine months of torture, Nobel Peace Prize nominee Bradley Manning’s trial is finally scheduled to begin June 3, 2013, at Fort Meade, Maryland. The outcome of this trial will determine whether a conscience-driven 25-year-old WikiLeaks whistle-blower spends the rest of his life in prison. Bradley believed that the American people have a right to know the truth about what our government does around the world in our name. We the People must send a message to the military prosecuting authority, and President Obama, that Bradley Manning is a patriot and heroic truth-teller.

With less than two weeks remaining before the start of Bradley’s trial, we’re asking for your feedback in prioritizing a number of possible projects.