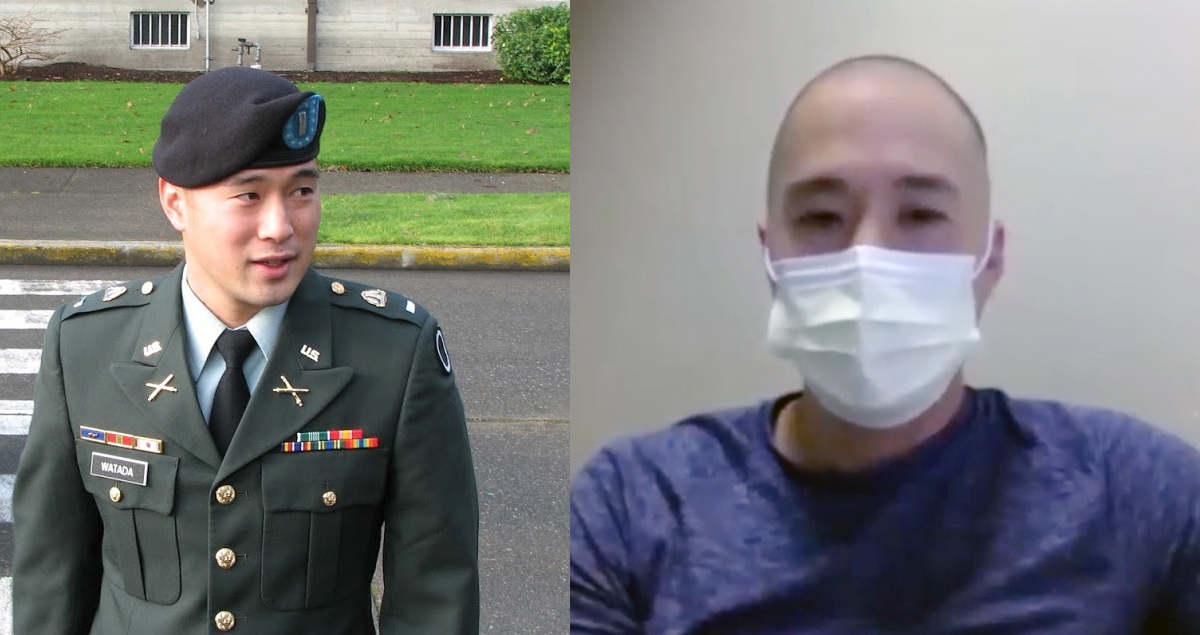 Courage to Resist’s work in launching the broader campaign to support Ehren Watada in the summer of 2006 in many ways kickstarted our organizing collective. We’re excited to share this update from Ehren as to what he’s been doing since. Today, Ehren is a registered nurse.

For background, here’s our archive of efforts and news from the “Thank You Lt. Ehren Watada” campaign. Ehren was the first military officer to publicly speak out against and refuse to deploy to Iraq back in June 2006. In February 2007, Ehren stood before a general court martial and faced seven years in the stockade as over a 1,000 supporters rallied nearby at the gates of Fort Lewis, WA. Ehren never spent a day in the stockade and never backed down from his assertion that the Iraq War was and remains an illegal occupation. To understand how this victory came about, please checkout out “How Lt. Watada and GI resistance movement beat the Army” by Courage to Resist director Jeff Paterson.

Ehren Watada: Yeah, thanks Anne, Um…I think that saying “no” was very difficult. I’d gone into the military expecting to be deployed to Iraq. I don’t know if I strongly believed the reasons that we were going in. I wasn’t that versed in politics, reasons why people were disagreeing with going. But you know, I was, I watched Fox news like everybody else, I didn’t have that much of, I didn’t really question why war. All I knew was that after the 9/11 attacks, people were being asked to serve and I was willing to sign up and go. So inevitably, eventually, in 2006, I was set to go with the Striker Brigade from Ft. Lewis. At that time, I did start to get a little more inquisitive, I think I was questioning some of the things that I had in the back of my mind as to what happened, “Why weren’t there any weapons of mass destruction?” Because that’s essentially what we were sold on as to the reasons going in and as I read more and I started to piece together more of what was readily available in mass media and other sources, it became very apparent to me that we had been misled. And we had been misled by the people that we entrusted, and I think for me that was a very-it was a very sad moment. Because it really questioned what you were doing, why you were in this uniform, why you were willing to sacrifice your life. And still at that point, I was pretty willing to go, I wasn’t happy about it anymore. I mean, well I don’t know -no one’s really happy to go to war, or conflict, or be deployed. But I no longer believed in what we were doing.

I felt extremely trapped, I felt depressed for a long time, and um….like Mr. Brady said…you know, you can sit back and say, “Well why isn’t anybody doing anything? Why aren’t people trying to stop this? Why aren’t people speaking out?” And I came to the realization that I’m a person too and that I have a responsibility, and I can, no matter what the consequences might be, no matter what little impact it might have, I can do something. And so then I had this epiphany. I wrote a letter of resignation to my commanding officer, I didn’t win any accolades for that, that letter, but for my troubles I was eventually court-martialed. And I was very fortunate for many people to rally to my cause and to support me. Very fortunate and very grateful for all of that, including yourself and Colonel Wright.

I was court-martialed, but the trial ended in double jeopardy so I was not convicted, essentially the army was unable to court-martial me any longer. And so eventually they just allowed me to separate. Are you still there?

And so, that’s kind of it in a nutshell. Since then, after I got out of the military. A family member of mine asked if I would help run a restaurant with him, that’s what I did for 6 years. It was very challenging in its own ways, there were a lot of long days, 16hr days, sometimes 18hr days, very little sleep but we found some moderate success. So I did that for about 6 years, I eventually said, “I have had enough”. So I left and went back to school for a couple years and became a registered nurse and I worked at some local hospitals here in Las Vegas, and of course, Covid hit, and I’ve been doing travel nursing since then, so I’ve been around the West Coast. Yeah, that’s what I’ve been doing up to this time.

[Laughter] ”Diners, Drive-Ins and Dives”, yes, well that is my brother, not me. He was the chef, he was the creative, the talent. So he was on the show, but I was behind the scenes, you know washing dishes…. I left it to my brother, again when I started nursing you know, so I believe a couple restaurants. But I kinda left it up to him as I moved forward in the medical field…. It’s been a difficult year [due to COVID-19]. It continues to be challenging.

In terms of my reputation, I mean, I guess within the military, I was relatively a junior officer, a lower ranking junior officer, so I don’t think I had much of a reputation. Within my unit, I mean, I was immediately ostracized. No one wanted to talk to me. And you know, people would talk and say things in front of me as if I wasn’t there but, you know, they would say things for my benefit. So I didn’t have to worry too much about a reputation I guess, ‘cause I really didn’t have much of one. I was a field artillery officer in an infantry unit so nobody paid me much mind anyway.

But as for what happened after, when I got out of the military you know, there were a lot of people who came to work for us, not a lot, a handful of people who came to work for me and they did say, “Oh are you that Ehren Watada?” and actually they were pretty supportive. As I worked here and there, people eventually, you know everyone tries to Google your name no matter who you are so and eventually will find out who I am. At this point in time, I think, especially with the younger generation that they don’t really have any opinion on the war one way or the other. So fortunately with that, I haven’t had to face too much, too much, I guess, negative things said my way, at this point.