Why Is My Kindergartner Being Groomed for the Military at School? 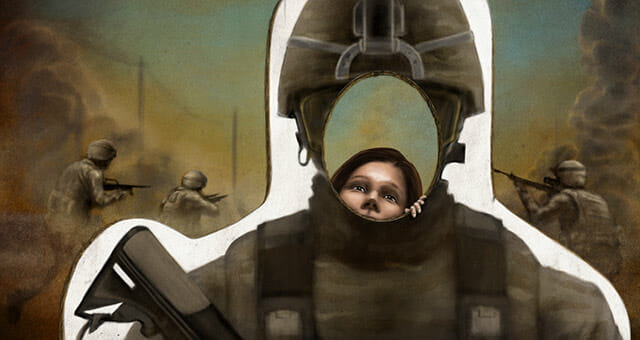 With the end of the draft in the 1973, the US military began recruitment, “by any means necessary.” Recruitment in schools; offering incentives such as scholarships, bonus money; ROTC programs; and even participation in kid’s toys, video games and pop culture all utilized as a way to make the military seem cool and exciting, without any discussion of the potential trauma or death war brings. So, what can we do? In Why Is My Kindergartner Being Groomed for the Military at School?, Sarah Grey discusses military recruitment efforts targeted at youth.

By Sarah Grey. Read the full article on Truthout.

When he got home from Iraq, Hart Viges began sorting through his boyhood toys, looking for some he could pass on to his new baby nephew. He found a stash of G.I. Joes – his old favorites – and the memories came flooding back.

“I thought about giving them to him,” he said. But the pressures of a year in a war zone had strengthened Viges’ Christian faith, and he told the Army that “if I loved my enemy I couldn’t see killing them, for any reason.” He left as a conscientious objector. As for the G.I. Joes, “I threw them away instead… I didn’t want to be the one telling him to dream about the military.”