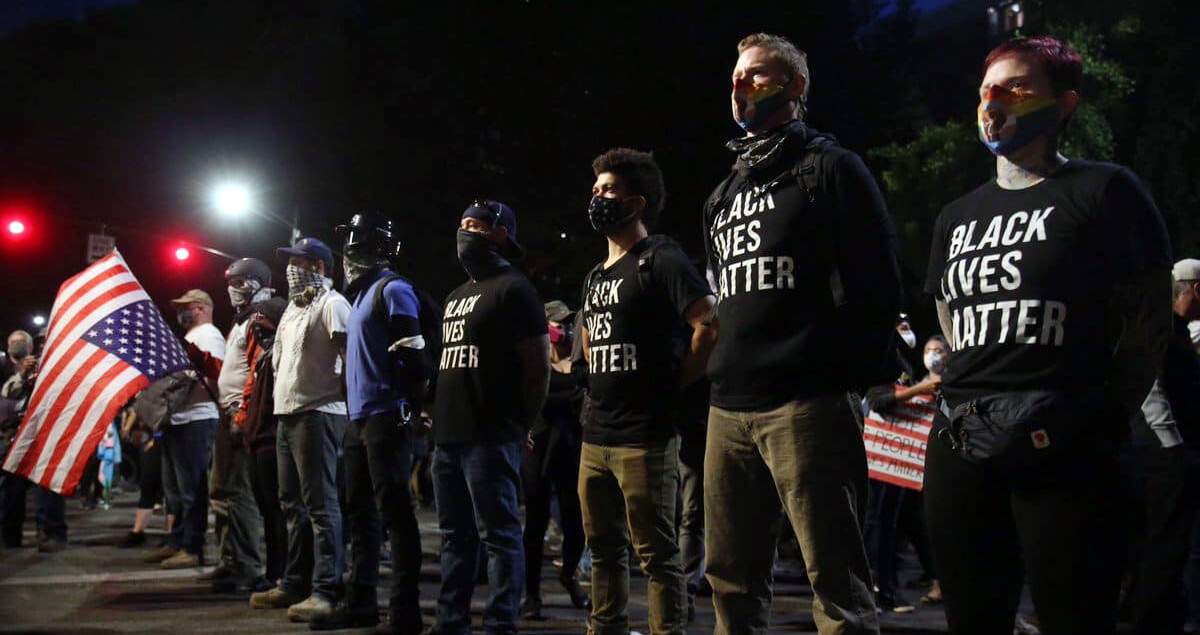 by Jeff Paterson for Courage to Resist

Protests for Black Lives Matter have been going on now for two months across the country, since George Flloyd’s murder at the hands of police in May. In June 2020, President Trump began deploying federal Homeland Security law enforcement to select cities in an effort to stop the protests and the removal of racist monuments. In particular, an executive order signed by President Trump on June 26 authorizes deployment of federal police without permission from the states they’re invading in order to protect “Monuments, Memorials and Statues.”

In Portland, these federal police have escalated tensions in recent weeks through tear-gassing protesters, including Mayor Ted Wheeler, and arresting protesters by pulling them off the streets into unmarked cars. Harvard Law professor Andrew Crespo has called the latter tactic a violation of the 14th amendment.

It’s alarming that the Trump administration is using these kinds of fascist tactics to threaten U.S. civil rights in pursuit of his political agenda. The removal of racist monuments in America is long overdue. Remembering history is important, but we’d do well to follow Germany’s lead – historical monuments should exist to honor victims and the oppressed, not war criminals and oppressors.

While the actions of federal police in Portland are disturbing, they have also served as an opportunity for brave Americans to stand up for what is right. Recently, a wall of veterans formed in Portland in order to help protect protesters from the federal police. They held signs including “Black Lives Matter,” “Disabled veterans 4 BLM,” and “I am an American patriot. Federal troops defend property, but this does not give them the right to take away my constitutional freedom.” You can see July 24 video clips of the veterans’ role in the protest from New York Times reporter Mike Baker’s Twitter stream.

Elizabeth Stinson is a licensed therapist who lives in Portland and works on the crisis hotline there. She shared with me:

We have veterans willingly taking the front line of the peaceful demonstrations here in Portland often standing for hours.  Often they are the first to get teargassed or maced.  The sheriffs have also been targeting medical street teams and legal support observers with both teargas and mace.  Last night it was brutal at MCSO: Multnomah County Sheriff’s Office. Trumps BORTAC Federal Marshalls brought an inhumane POTUS sanctioned violence to Portland- -unfortunately It didn’t take much for the Sheriffs to pick up on that.  Let’s be clear.  It’s never okay to teargas or mace demonstrators.

Three-tour Marine Corps veteran Duston Obermeyer eloquently explained the significance of taking this action, “I was here on Saturday… We were attacked. We decided that based on the requirements of the constitutional oath we all took, we needed to be out here to ensure that our citizens did not have their right to free speech and their right to protest and their right to assemble taken away from them by federal security forces.”

Additionally, veterans have been active in supporting the Black Lives Matter protests nationwide, and hundreds have signed an open letter calling on members of the National Guard to stand down rather than deploy against protesters.

Back in June, Courage to Resist explained the importance of citizen action in defending our democracy should Trump refuse to leave office after losing the election. On July 30, Trump himself again helped justify these fears, by Tweeting a suggestion that the election should be delayed due to the pandemic, after falsely claiming that mail-in voting will result in fraudulent results. (In fact, the Brennan Center for Justice has ranked the rate of mail-in ballot fraud extremely low, at less than 0.0009%).

It’s part of the common dictator playbook to provide flimsy excuses and justifications for why elections should be postponed or altered “for the good of the nation.” Trump has already shown his willingness to violate rules and norms, undermining our democracy in the process. As reasons to resist his administration’s racist and unjust policies continue to grow, so do reasons to be vigilant about defending our right to a fair and free election.

Furthermore, the Trump administration (including his adult unqualified and unelected children) has failed spectacularly at saving lives during the COVID-19 pandemic, performing far worse than most developed governments. Vulnerable people like the elderly, immigrants and people of color among those worst impacted. If Trump clings to office, it will almost certainly lead to more unnecessary casualties.

Engaged citizens acting bravely, like the protesters in Portland, are key to defending our democracy and promoting a more just and peaceful future. We can and must do this by protesting injustices such as racist policies and police violence, and supporting federal officers and troops who refuse illegal orders, whether internationally or domestically. And, of course, voting for lesser evils, occasionally. 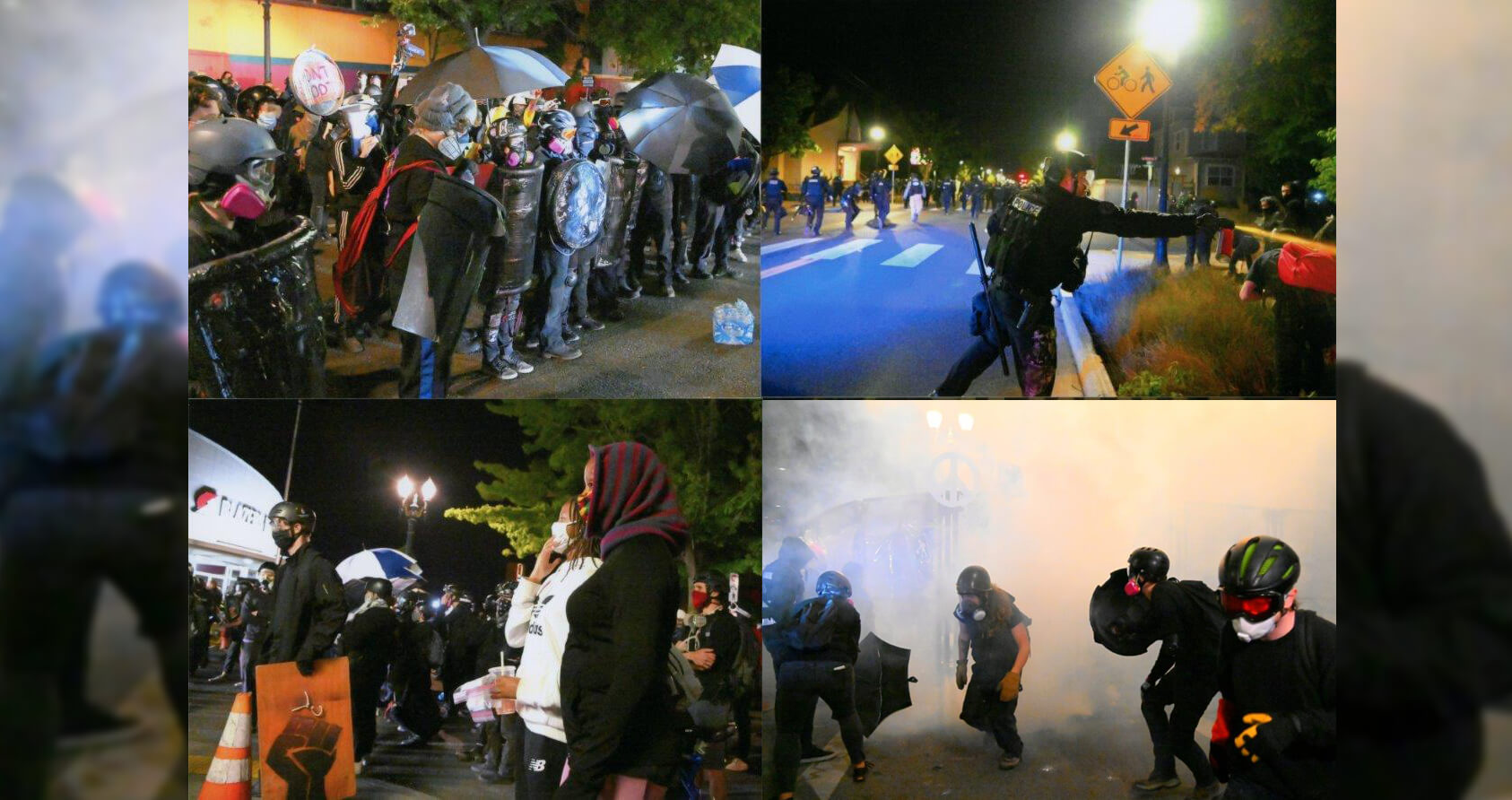 Vietnam War US Army medic Mike Hastie has been out on the streets of Portland photographing and documenting the federal thugs. Those are his recent photos above. A couple weeks ago, he was pepper sprayed directly in the face as he was verbally challenging their moral and legal authority. He shared this from last night:

I took part in another demonstration.… There were about 300 protesters at the [police] precinct, most of them young, in their 20s and 30s. I have been around them many times as I have been present at these demonstrations throughout the Summer. These young people are a new kind of resistance, as they have an appearance of being gladiators, and I say that because they are wearing things that protect them from the police. Those in the front row are wearing bicycle helmets, gas masks, shin guards, protective shields, and a shit load of courage.

It is amazing how many women I see in harm’s way, and the intensity I see in their eyes. Many of them have been injured, as the police often do not differentiate between man or woman. One woman showed me a video of herself being knocked to the ground for no apparent reason by a police officer, and she had press credentials….

This is a new generation of protesters, as they are using the current technology to organize and defend themselves from the powers that be who are trying to control them. Most of them define themselves as anti-fascist, as they see no future for themselves in a System that has essentially lost its mind.

They have their whole lives ahead of them, and for many of them they see a bleak future. They have very little respect for the generations that came before them because of what the world looks like NOW. Black Lives Matter has opened a powerful door for a lot of people, because they identify with their struggle for existence…

I’m 75, as I will be gone in a few years. What would be my response if I was 25-years-old living in these times? I often think of the words of Bob Dylan when he wrote: ” The truth was obscure, too profound and too pure, to live it you have to explode.” … The young people at these demonstrations in Portland are serious, because their lives depend on resisting a government that has become a monster. For them, if it is this bad NOW, what will it be like in twenty years?

Courage to Resist is providing legal and political support to National Guard members who refuse to deploy against protesters. You can learn more about how to join us in supporting them here.